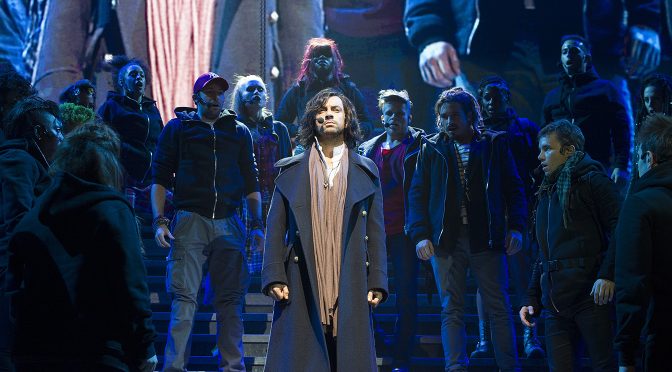 Andrew Lloyd Webber’s generous gift to theatre-goers confined through Covid-19 during the Easter weekend is, appropriately, the passion story. Retold with an exciting rock score and the brilliant lyrics of Tim Rice, it is one of Webber’s most adventurous endeavours, dating from 1970. This arena production from 2012, while not my favourite, is still a real treat.

The production is star-studded and had a TV competition behind it that led to the casting of Ben Forster in the title role. Mel C of the Spice Girls takes the part of Mary Magdalene and Tim Minchin, a personal hero, is Judas. The delivery is clear, nobody sounds unpleasant and they can all perform to big crowds – important given the settings for the tour – indeed, each gets better as the show progresses. But none of the leads is actors. None manages to get beyond their public personas. Minchin still even sports his trademark eye make-up, and the close-ups provided by a filmed performance highlight this shortcoming.

Things are much better with the Pharisees: Pete Gallagher and Gerard Bentall are strong. Best of all is Alexander Hanson’s very classy Pontius Pilate. All three not only sound great but bring depth to their roles. Hanson’s part during the 39 Lashes is a real study in how to hold a stage. These achievements are despite, rather than aided by, director Laurence Connor’s ideas for the show.

There’s a frisson at the start with a suggested connection between Jesus as a revolutionary figure and modern-day rioters, courtesy of filmed news footage. And it’s understandable that the Occupy movement looked like a godsend for someone seeking to do something different with the show. That the hippy vibes from the original can be given a contemporary spin is fair enough. But the idea isn’t thought through or performed with enough skill. While difficult to judge on screen, the choreography looks suspiciously like a work-out routine and the large ensemble appears drafted en masse from the same drama school.

Some of the ideas fail abysmally. Casting the Pharisees as vaguely Masonic makes no sense, likewise having the Temple as some kind of nightclub surely miss the point that both reflect established religion. Instances of social media seem misplaced (cue projected hashtags) and lots of mobile phones are used. Remember that one of Rice’s best lyrics points out, “Israel in 4BC had no mass communication”.

The insistent temptation to form a connection with the crowd should surely have been resisted when it comes to mainstream media, too. Connor has Herod as a game show host (a very uncomfortable performance from Chris Moyles) while it is the press that interrogates Jesus as a celebrity. Filmed as he falls, as if paparazzi provide a new station of the cross, Forster does well. But you don’t need to be a reporter to ask these questions – the media as the medium are not needed – they quite literally get in the way. The particular power of this musical is that it deals with spirituality so directly, and with such humanity. Connor ignores that strength to the show’s detriment.

Available on The Show Must Go On! youtube channel until 12 April 2020 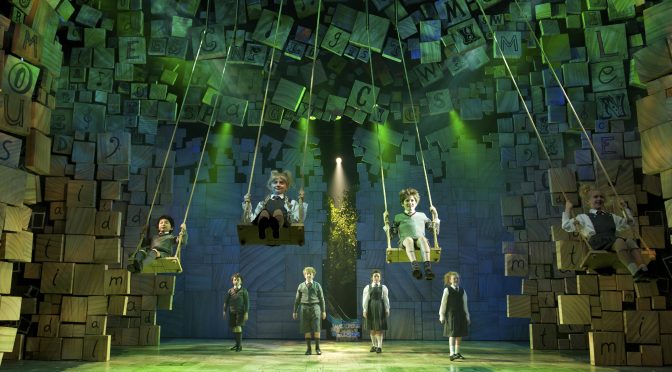 Matilda The Musical is marvellous, the best thing I’ve seen in ages, and one of those pieces of theatre so remarkable that it can be recommended to everyone. That’s a bold claim for any musical, let alone a musical with children in it. When pressed, we know that good children’s theatre will appeal to all ages, yet many shy away from it. That’s the first great thing about Matilda: not only are the kids marvellous, but Matthew Warchus’s production itself is so strong the show becomes unmissable.

Dennis Kelly’s appropriately imaginative adaptation of Roald Dahl’s much-loved children’s book manages to be sweet without being sickly. The story is dark, even frightening, as fairy stories should be: clever Matilda’s life with her parents is pretty miserable and things only get worse when she starts school. There are fairy godmothers here, of sorts, but Matilda knows that when something isn’t right you should sort it out yourself. She’s the embodiment of precocity and you can’t help falling in love with her.

Peter Darling’s inspired choreography complements the cast of talented youngster marvellously and the same can be said of the superb adult ensemble that joins in. Paul Kaye and Josie Walker are superb as Matilda’s awful parents – larger than life – just as they should be. But the star of the night is Bertie Carvel who plays Miss Trunchbull, the school’s hammer throwing headmistress with vocabulary expanding insults, in such grand style that his character becomes a creation in its own right.

Miss Trunchball gets the best opening number for a transvestite on stage since The Rocky Horror Show. And that isn’t a sentence I thought I would write in this review. But it goes to show how unusual Matilda is, dipping its toe into insanity but firmly on the side of genius. The man we can thank for this is composer and lyricist (and successful stand-up comedian) Tim Minchin. Not only has he written some perfectly revolting rhymes and a string of great songs, even his incidental music is stunning, blending the magic and mayhem of the story to make this a wonderful theatrical evening.

Minchin’s songs tell stories – the key to musical theatre numbers – and move and develop the plot so that the show is compelling as well as funny and moving. Matilda will captivate you and her love of words is infectious – Matilda The Musical will have you reaching for the thesaurus to find new superlatives.

Written 25 November 2011 for The London Magazine