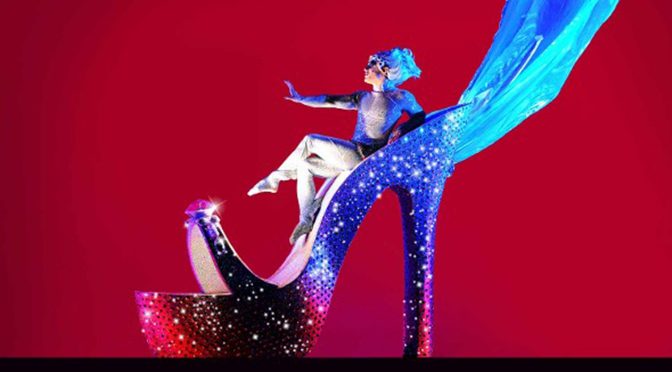 Priscilla Queen of the Desert has been running in London for nearly two years and, presumably on the grounds that you can never have too much of a good thing, the Palace Theatre has now launched Priscilla Parties. There are drinks before the show to get you in the mood, with goodie bags containing feather boas and specially commissioned cakes. Perhaps best of all, these packages give a substantial reduction on the price of seat.

I feel compelled to declare now that Priscilla isn’t really my cup of tea. Any show that sells a cocktail looking like a slush puppy is likely to alarm rather than excite and feather boas are not part of my wardrobe. But it’s hard not to enter the spirit of things when fellow audience members are clearly having such a good time.

The story of three drag queens who travel across Australia in a bus has a plot so thin it seems to have been abandoned en route. A juke-box musical format blasts out pop songs everyone will know incredibly loudly and we are treated to a series of dance and lip sync routines from an energetic cast.

Priscilla is hugely impressive on a technical level. Simon Phillips directs with military precision, and all the praise you have heard about Tim Chappel and Lizzy Gardiner’s costumes is well deserved. But this feels more like a tribute show than anything genuinely theatrical, and slight attempts at ironic appropriation never quite work.

The talented cast certainly doesn’t have the time to form an emotional connection with the audience. Don Gallagher, as the ageing transsexual Bernadette, manages well, but desperate stabs at sentimentality fail for his colleagues, whose characters simply drown in their sequins.

Drag just doesn’t have the charge that it used to. Priscilla can be brash and beautiful but it can’t really be bold. The  manner of cabaret currently so fashionable in other venues has performers that abandon impersonating women to flirt with fantasy and obscenity. When Priscilla’s players reminisce about the past in a flashback scene, the show excels. When they try to be edgy, it fails to convince. This may disappoint you, but the chances are you’ll be having too much fun to notice.