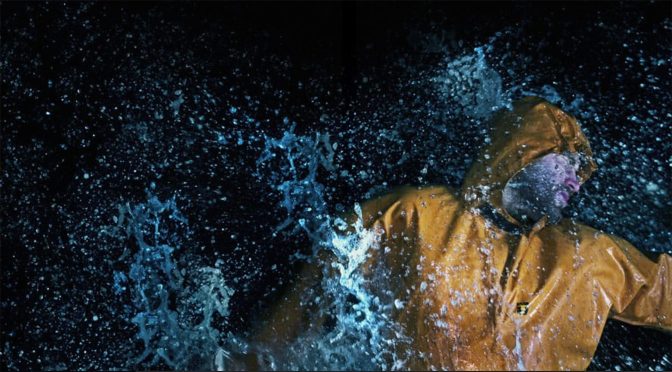 The Elephant & Castle venue’s fund-raising offering during the Covid-19 lockdown is impressive. There are four projects: Shakespeare, the musical Wasted, weekly monologues from Philip Ridley and this play from Bear Trap Theatre, which originally ran in 2011.

Written by Jesse Briton, who successfully packs a lot in to just 80 minutes, it is the story of ‘cursed’ fishing trip by Devon trawlermen. A troubled industry is the backdrop to an increasingly dangerous trip journey, which makes the show exciting.

Also directing the show, with help from lighting designer Seth Rook Williams, Briton conveys the peril faced – and the storm itself – with the simplest of means. It’s the kind of show that makes you love live theatre. And the recording, which has a static camera, is the kind I’m starting to prefer, as it’s far more authentic.

Drama doesn’t just come from the sea. Briton’s characters are impressive, if not uniformly developed. Bound shows a man’s world that diverges slightly from the toxic masculinity often seen on stage. Regardless of the arguments, big and small, there is a strong sense of care and affection – and a powerful undertow of a claustrophobic community burdened by its history.

While the cast might vary a little more in age, all do a good job with their distinctive roles. Joe Darke does especially well with Graham, who provides a good deal of the show’s many lighter moments. The older men are the source of plenty of jokes, so it is to the credit of actors James Crocker and Alan Devally that their moving story lines are still so strong. And Daniel Foxsmith is excellent as the most complicated character, Reece, who is a mix of unappealing politics and good common sense.

It isn’t all plain sailing. An outsider to the group, a Polish agency worker, is a role with a lot riding on it; Thomas Bennett works hard, but the character feels too naïve and Briton falters when it comes to showing English as a second language. The character of Woods, the skipper, is made compelling by John McKeever’s performance, but really needs plumping out.

The moral dilemma that leads to the play’s finale arrives too late and is ill prepared. Even worse, it isn’t really strong enough – there’s little sense that these brave men would take any other course of action, no matter how awful the outcome. But Briton’s direction bridges problems in his script. With the help of associate director Joe Dark, the movement work here is excellent. Best of all, songs – performed by a cast who turn out to be excellent singers – bind the show in ship-shape fashion.

Available until the theatre is open again at https://southwarkplayhouse.co.uk/streaming/