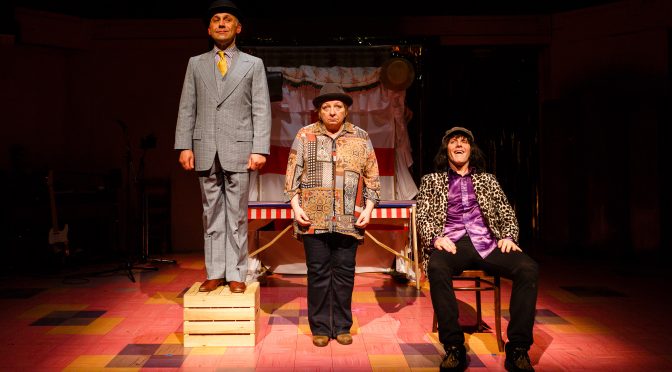 If you want to classify contemporary playwrights, James Graham is the one that writes about politics. His new play, via the Theatre Royal Plymouth, is engaging and imaginative. Taking as its subject David Screaming Lord Sutch and his political party, which gives the play its name, biography is combined with politics, cultural history and inspiring touches of English eccentricity. The masterstroke is to tell Sutch’s story via famous comedians. It’s a bonkers technique that’s appropriate for its subject and it’s original, funny and brilliantly written.

So, Sutch’s mum is first a pantomime dame. Then, as mother and son plan to open a bric-a-brac shop, she becomes Albert Steptoe. Interviews are conducted on Just A Minute and a visit to the doctor is a Monty Python sketch. It’s quite a carry on – yes that’s there too –  an encyclopaedic journey through comedy masters. In each sketch, Graham is up to the job – he could have written for any of these greats. And it’s all manipulated to tell Sutch’s life story. Wow.

A demanding play for actors, the impersonations are non-stop and the delivery breathtaking. Samuel James gives a stellar performance as the lead, joined by four others, alongside Tom Attwood whose role as The Musician roots the play. Highlights may depend on your comedy preferences: Joe Alessi’s Alf Garnett is perfection, and how quickly Jack Brown embodies Kenneth Williams and Julian Clary cannot fail to impress. Tellingly reflecting the sexism of the time, the women have fewer pickings. But Vivienne Acheampong does well in a bed-hopping farce and Joanna Brookes is stunning in the male roles she adopts.

James’ performance is the one that requires real depth. Not that this stops a great Frank Spencer impersonation. But there is Sutch’s struggle here as well. Focusing on this fascinating figure is a task slightly at odds with such a high-energy show. Prone to depression and trapped in a public persona, his story gets a little lost despite the skills of director Simon Stokes. Sutch’s suicide seems too much for the play to handle.

Stokes shows fine work when it comes to audience participation – it’s cunning for a director to control this. Such planned fun is always a pet hate (joining in with songs makes my toes curl). But the raffle tickets and bingo cards waiting on seats have a point here that makes them (almost) worthwhile. Another bold stroke from Graham, games typify his novelty and magpie humour in this damnably clever piece.