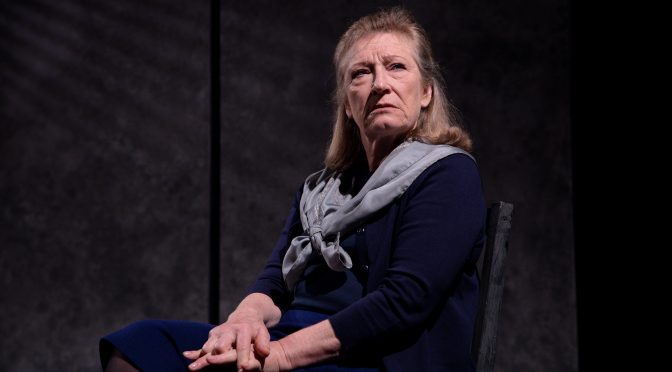 Director James Roose-Evans’ new project, Frontier Theatre, aims to promote older talent. The actors in their third age (their term, not mine) in this premiere production indicate that the company will have no difficulty finding performers. The play chosen is more problematic. Marguerite Duras’ text (translated by Barbara Bray) is rooted in post-war French philosophy. Ostensibly a mystery story, based on a sensational murder, the biggest puzzle is the play itself.

A long way from a whodunit (the confession has been heard and motive is talked about a lot), even the why seems beneath Duras. Existential angst fills the play: talk of dreams, freedom and “seething” alienation, while family ties and religion get predictably short shrift. Unashamedly intellectual and, to be honest, somewhat hard work, you can practically see the Gauloises cigarette smoke and imagine yourself on the Left Bank.

Which is not to say that the production isn’t superbly well done. Roose-Evans’ direction reveals his experience, superbly controlled and sharing Duras’ intellectual vigour. The direction benefits the play with taught pacing and, without frills, enforces its seriousness.

First we meet the husband of the murderer. A philandering egotistical figure, blunt and articulate, impeccably delivered by Martin Turner. There’s a strong sense of the man’s inner life, grasping Duras’ psychological insight, even as we mostly hear about his wife, Claire.
When we meet this murderess, it’s electric. Charlotte Cornwell’s performance is a marvel as this proud, pained, haphephobic psychopath. As a study of a peculiar kind of madness, Cornwall’s performance gains considerable power from understatement – she really has you on the edge of your seat.

A younger actor, Kevin Trainor, takes the largest part of The Investigator. That’s right, he doesn’t have a name, and pains are taken to point out he isn’t a policeman. Trainer does well with this flat role, injecting a primness and energy that almost brings him to life. But the character is so clearly a device, full of clever theories, that he quickly becomes tiresome.

What ‘facts’ exist in the mystery are broken down by Duras with skill. Trainor’s monosyllabic final speeches are perfectly handled. While the openness of the text is an achievement that might stimulate, be warned, it is also frustrating and uncompromising. Nonetheless, one of Frontier Theatre’s aims is to produce master classes using its participants’ wide theatre experience, and this show ticks that box right from the start.