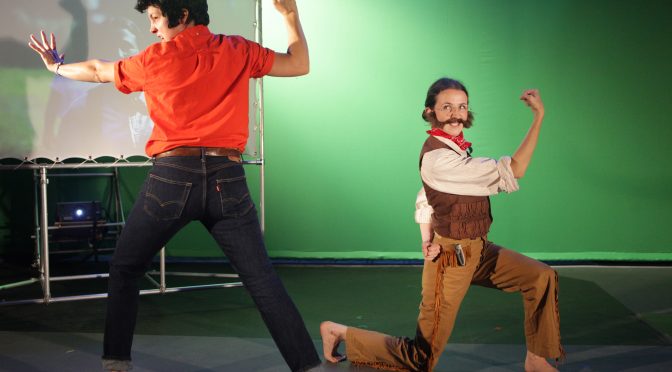 Brooklyn-based theatre ensemble the Team has collaborated on an exploration of American culture that presents a road trip like no other. Libby King and Kristen Seih play would-be lovers, Ann and Brenda, as well as the iconic Roosevelt and Elvis, who people Ann’s imagination. This is drag at its most radical, making gender politics provocative and fun.

What pieces of work Theodore and Presley are – role models of masculinity – brilliantly rendered by King and Seih. Lots of whacky fun is had at the expense of these male egos: the president playing ‘Whack-a-Mole’ with on-screen buffaloes is just one genius stroke, while Elvis/Ann/Sieth’s (it gets complicated) karate with pizza boxes is great. But these aren’t straw men. The biographical research has been done (I learned a lot) and both figures are presented intelligently.

Anchoring the show is the story of Ann – this is the bit the history is for – a meatpacking worker, unhappy with her sexuality, who dreams of visiting Graceland. An endearing character, her private conversation with Elvis makes you will her to escape and shows the dangers, alongside the delights, of a powerful imagination.

All theatre is collaborative, of course, but scripts with many authors (there are seven here) can be messy. And RoosevElvis is as crazy as you could wish for, with sets and screens moving around and a couple of rowing machines thrown in. Yet, with Rachel Chavkin directing, the show feels fluid rather than chaotic, and spontaneous despite a reliance on filmed material.

One of many inspirations for RoosevElvis is the movie Thelma and Louise, which leads to a brilliant finale for Teddy and Elvis. But don’t worry – Ann is in the real world and eventually has to face it. Her small step to independence is heart warming, Most importantly, this is a story with emotional impact: theatre where theory meets real people – this Team works.