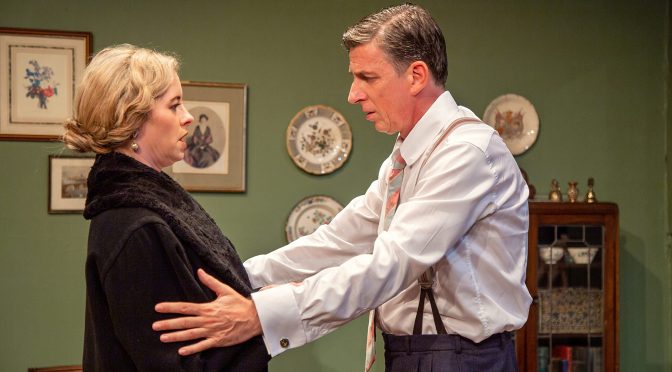 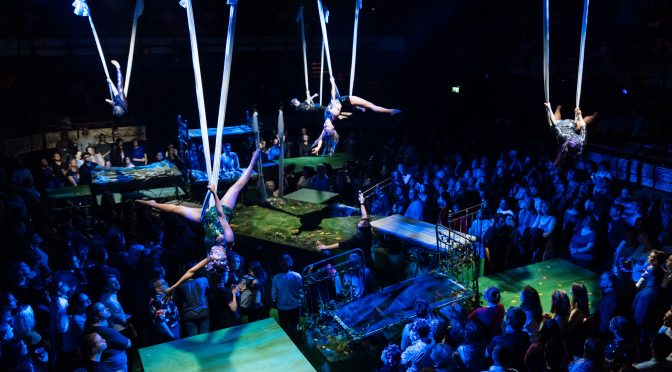 While Shakespeare’s romantic comedy is always a popular seasonal play, 2019 seems to be the summer for ancient Greeks and misbehaving fairies. While the production at Regent’s Park has already closed, you can still enjoy the Globe’s version, or this one from director Nicholas Hytner. It’s not a competition – the text continually proves its versatility and brings out the best of theatrical creativity. Suffice to point out the five-star reviews for this production and confirm that it thoroughly deserves them.

This is a promenade performance with the Bridge’s stalls space converted for standing patrons. I’m not a fan of the format but appreciate that the atmosphere appeals to many and, without question, Hytner manages it masterfully. The danger is distraction, as you have to keep your eyes peeled for potential moves and be more aware of fellow audience members. Some lines are lost during scene changes; rehearsing “obscenely” being a personal favourite that is sacrificed. All the more credit, then, to the impressive cast who command attention and use the crowd expertly. Above all, praise for designer Bunny Christie, who uses small stages that come up and down (seen in Julius Caesar last year) to great effect. The addition of a collection of beds that rise up to the roof and trapeze artists makes the show a visual delight.

Incorporating the audience is a gift to the comedy in the show. Take the play-within-a-play: as the workmen putting on a show account for playing in the round, this scene proves the highlight of a tremendous performance from Hammed Animashaun, who takes the role of Bottom. And there’s a nice self-deprecating note as well – as Moonshine’s torch blinds Hippolyta, Theseus helpfully consoles and explains by saying, “It’s immersive”. The humour may not be subtle (having such a great response to characters taking selfies is vaguely depressing) but it is sure to prove memorable. Touring one of the beds around the crowd or getting everyone to hold hands and circle the action are fun-filled highlights.

Along with Animashaun’s fantastic stage presence the production boasts an acrobatic Puck in David Moorst. A little too keen on his ad libs (which the show abounds in) Moorst’s physical performance is hugely impressive. And he brings an interesting cruel edge to his punk-inspired anarchy. This Puck is not entirely likeable or stable. The four Athenians in the forest feel a little too much like his victims and their roles (led by strong performances from Isis Hainsworth and Tessa Bonham Jones, as Hermia and Helena respectively) become more moving than funny.

Hytner’s strength is that, for all the fun, he isn’t afraid to make the show serious. There’s real tension in the plight of Hippolyta and the young lovers, a drama led by the excellent Oliver Chris, whose Theseus is steely to the point of sinister. And there’s an air of menace in Titania’s plot against Oberon – no, that’s not a mistake. In a brilliant gender swap, Gwendoline Christie gets the larger role as a Fairy Queen victimising her husband. A swipe at the patriarchy? Maybe, but while Oberon’s affair with Bottom gets plenty of giggles (praise for Chris and Animashaun again) the swap adds another layer of transgression that makes this dream edgy. Gender fluidity in Shakespeare is embraced more than ever at the moment, and Hytner is very much on board. But it’s because his direction recognises there can be bad dreams as well as good ones that his show appears so magical.