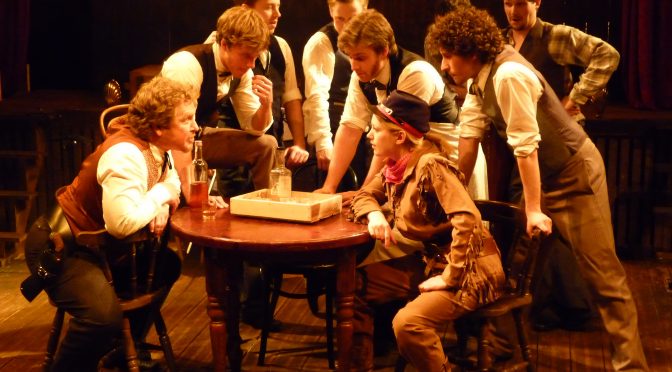 Thom Southerland is a director with a reputation for putting on big musicals in small spaces. His State Fair, such a hit last year at the Finborough, is to transfer to the Trafalgar Studios in August. Before that he is working Upstairs at the Gatehouse in Highgate with Fain and Webster’s Calamity Jane. And he has another hit on his hands with a production marked by intelligence and wit.

Katherine Eames plays the stagecoach rider Calamity Jane and her search for love with confidence and style. The clever move here is to gently open up the story to focus on Jane’s hometown of Deadpan and the locals of the Golden Garter bar. Conveniently doubling as the community theatre, it has scheduling problems and a habit of hiring the wrong artistes. After a word from Jane, the volatile crowd deals with a mistaken booking in a most civilised fashion – the performers become part of the neighbourhood. It’s not only endearing but makes this a real ensemble piece, where every member of the cast can play a part.

There are plenty of witty performances. Anthony Wise puts in a terrific comic turn as the bar’s owner. Ted McMillan is great as the wrong act, Francis Fryer. Confusion over his name means the hillbillies are expecting women, which results in a great scene in drag. The same mistake hasn’t been made by Southerland. His clever casting of the super Ms Frances Campbell as Rattlesnake transforms the gender of the role and reminds us of what Jane might become if she doesn’t change her tomboy ways.

The mood is set with a song dedicated to Adeline Adams, the performer the gold prospectors really want to appear at the Golden Garter bar. The whole male cast participate in Phyllida Crowley Smith’s inspired choreography as they serenade Adeline’s photograph on a cigarette card. ‘A Woman’s Touch’ has a similar whimsy, with the ladies in the ensemble appearing like the birds in Snow White to transform Jane’s home. All great fun with not a single number wasted. Careful musical direction from Mark Aspinall allows the romance of the piece time as well – the rendition of ‘Secret Love’ is startlingly beautiful.

There is plenty for those with a sentimental streak in this show. It is as heart warming as a musical of its kind should be. But this is also a very smart production and it’s great to be reminded, yet again, how wonderful fringe theatre in London can be. The stagecoach doesn’t stop at Highgate anymore but you should Whip-Crack-Away up there as soon as you can.

Written 24 June 2010 for The London Magazine