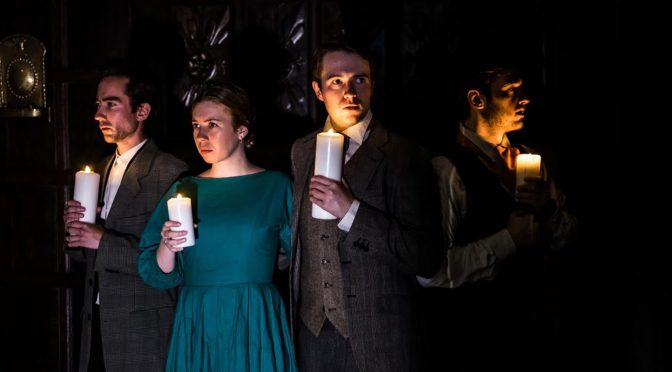 Tea Break Theatre’s time travelling version of Bram Stoker’s classic starts with a touch of tour guiding that suits its setting in Hackney’s most historic house. As we’re ushered into the gorgeous Great Chamber, it soon becomes clear that our room steward is batty (sorry) and that this National Trust property has a problem with vampires.

A tiny plot spoiler – the cast is among us from the start and the immersive action begins in the present day. Going back in time, as the evening unfolds, is a good idea but these modern mirrors of Stoker’s characters ring hollow and the performers get off to a shaky start. Jon-Paul Rowden’s Van Helsing suffers most, as his role is reduced in dignity and never recovers. Some of the cast grow into their parts nicely: Jennifer Tyler is great when she gets her fangs and Louise Wilcox gives a committed performance as Elizabeth Renfield. The satisfying exception is Angela Nesi, playing Dr Jane Seward, who is terrific from start to finish.

Director Katharine Armitage is excited by the idea of circularity and uses it to take us through the story. The strongest moment manoeuvres the audience into a circle, surrounded by the chanting undead, and another sketch of a scene has us join hands in a séance. But the majority of the evening needs more crowd control. Even for a small group following an abridged story, focus is lost on both plot and emotional involvement – it’s too tempting to see who is creeping around and slamming the doors.

Turning out the lights never fails to give a thrill, so you can’t blame Armitage for using the trick often. And the chance to be face to face with a vampire (a strong scene for Tyler) is a good idea for an immersive show. Yet if you are a big fan of horror, or a die-hard devotee of this theatrical style, I doubt the efforts here will amaze: the production just isn’t scary or interactive enough. But this Dracula is a fun night with some good ideas behind it, and it ends in a suitably bloody tableau, with a thoughtful twist that illustrates the show’s intelligence.