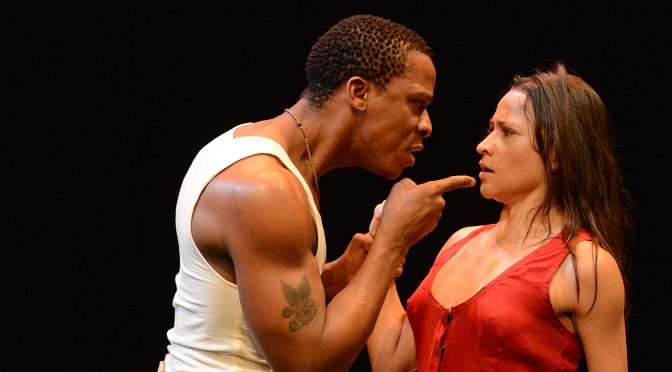 South African director and writer Yael Farber has brought her Mies Julie from Cape Town – via the Edinburgh Festival and considerable critical acclaim along the way – to the Riverside Studios in Hammersmith. Farber’s wonderfully free adaptation of Strindberg’s drama of sex and class, the 1888 Miss Julie, adds the toxic politics of present day South Africa to create an explosive mix.

The majority of the adaptation is inspired. The action is set on a farm besieged by ‘squatters’ aiming to oust the white Boer owners, Miss Julie and her father. The homestead is staffed by John and his mother Christine, who has a mystical, ancestral bond with the land. The racist connotations of Julie’s decision to dance with and then sleep with John add to the intensity of Strindberg’s writing, which can baffle a modern audience. And yet while this potent layer of politics benefits the play by amplifying each character’s desires, it becomes monotone. Mixing the personal with the political fascinates, but Farber falters in successfully conducting what starts as an orchestral piece, unfortunately reducing it to a single note.

Yet the execution of Mies Julie is fantastic. Aided by a soundscape (created by Daniel and Matthew Pencer) that includes traditional music performed by Tandiwe Nofirst Lungisa and Thoko Ntshinga, who also plays Christine, the play’s atmosphere is magnificently oppressive. Better still are the central performances from servant and mistress Bongile Mantsai and Hilda Cronje: the chemistry between these two is electric, their balletic movements captivating amidst the show’s hysteria and gore. The games they play are deeply erotic and for the most part capable of carrying the portentous burden placed upon them. It’s impossible to take your eyes off Mantsai and Cronje as they travel to the play’s depressing, bloody conclusion.

Written 12 March 2013 for The London Magazine