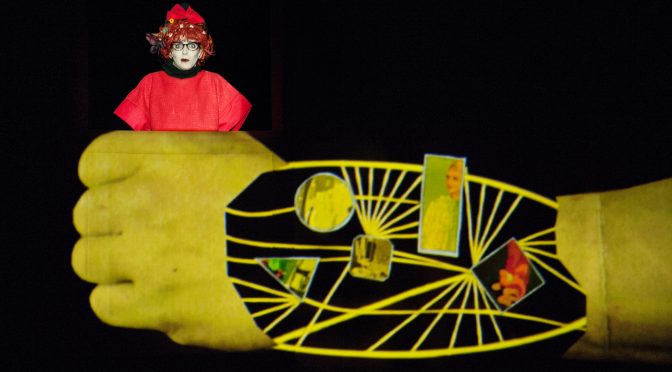 1927’s new work, Golem, is currently showing at the Young Vic. The company, which combines live performance with animation and film, creates spellbinding works with stunning visuals and a wicked sense of the comic, both characterised by a unique style and independence of thought. Gustav Meyrink’s novel about Golems ­– clay figures that can ceaselessly follow human commands – is the inspiration for the show, and creates a springboard for a witty and insightful commentary on modern technology.

The magical Golem, who revolutionises the world, morphs from an all too anatomically correct mute to an updated version, a Klaus Nomi-styled imp, who knows what you want before you do and tells you about it. The illustrations by Paul Barritt are a marvel, and the interaction with them by the talented cast is a joy. Blink and you’ll miss the rich details. The accompanying music by Lillian Henley contributes atmosphere and humour. You’ll want to be all ears, as well, for the clever verse script by writer and director Suzanne Andrade, which I would love to take home and study.

Wry and wise, it’s the ubiquity of the Golem and its corporate owners, a chain called ‘Go’ that upsets most. The home, office and town drawn by Barritt change as Go’s logo takes over. Things become cleaner, maybe safer, but a lot more homogenised – sounds familiar? 1927 knows none of us is immune, not even the show’s punk band, Annie and the Underdogs, which is eventually co-opted (anarchy is also a lifestyle choice). But not all is gloom. This theatre company alone is contrary enough to show that all is not lost – 1927 at least wants to think for itself and does so with style. As Robert comments after the first attempt to sell him Golem, it’s intriguing, and it rhymes.