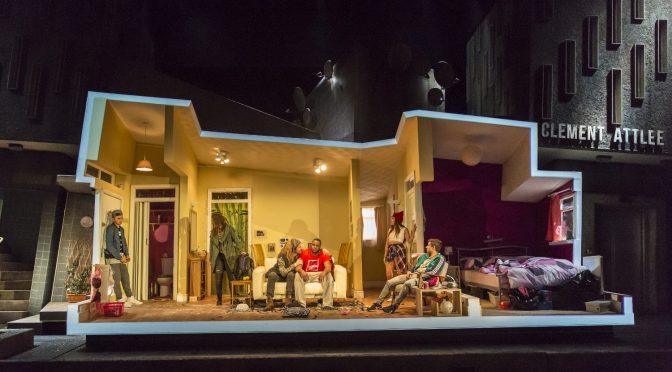 There are some interesting ideas lurking within Suhayla El-Bushra’s new version of Nikolai Erdman’s comedy. The basis is brilliant – when a man announces he will take his own life he becomes hounded by those looking to use his death for their own ends. You might guess that the production updates the action to modern-day London (doesn’t everything?). More surprisingly, the satirical target is moved from Soviet Russia, not to the greed and inequality in our own times, but to left-leaning well- meaning folk. And El-Bushra replaces the State with social media – a neat move that offers insight and great satirical potential (after all, you can’t exaggerate online excess). Unfortunately, neither of these twists actually makes the play funnier than its original premise.

Mocking a desperate group of people living on a council estate is in questionable taste, aside from coming close to sitcom or reality TV show territory. More importantly, the treatment just isn’t witty enough. The script has a few risqué jokes but hardly any big laughs and a reliance on bad language for punchlines that is offensive in being so lazy. Director Nadia Fall doesn’t help, using a great-looking set (by Ben Stones) in a cumbersome manner and adding music and dance – presumably to appeal to a young audience – that may be good, but slows things down. There are frantic scenes, which the cast are well choreographed for, but the energy is wasted as stops and starts ruin the pace.

The collection of stereotypes that come to hassle our hero Sam aren’t all badly written. There’s a café-owning ex-PR girl, a teacher-performance-poet, local councillor, mental health worker, an old friend trying to hide an affair and assorted local youths. It’s a long play. All look for Sam to take the blame for something and to make a ‘statement’. But there’s an inverse relationship between characters where the satire has real bite, such as a despicable documentary filmmaker, and disappointing performances. Jokes are wasted with one-note delivery. Then some strong comic potential (Lizzie Winkler and Ayesha Antoine) isn’t given enough to do. It’s tempting to see an element of bad luck for El-Bushra here.

My intention was attend the scheduled press night, which was then postponed due to the indisposition of the lead, Javone Prince – surely the biggest misfortune for the show. However, the poorly presented main character is reduced to little more than a foolish bore, while scenes of Sam’s home life with his wife (a hard-working Rebecca Scroggs) and mother-in-law (the always excellent Ashley McGuire) achieve little. Yet the role was a triumph for Prince’s understudy, Adrian Richards, who gave a performance that has made me want to post this review despite it being, strictly speaking, about a preview. Richards’ comic timing is among the best of the night and he managed to give Sam a lost, youthful, appeal. Richards’ valiant efforts lifted the atmosphere for the whole evening. Luck at last, but little to do with the show’s actual merits.