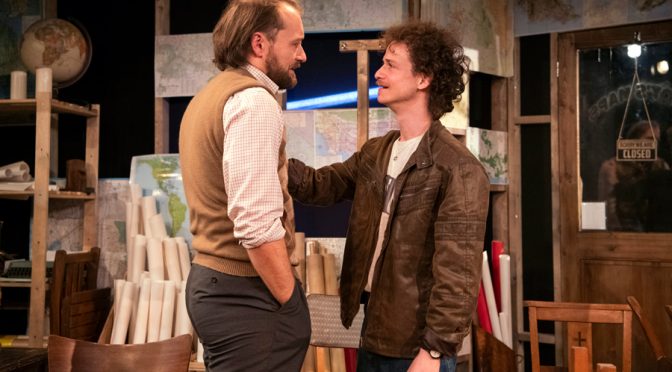 Steven Dietz’s 1993 play is a moving story of the AIDS crisis that works hard to provide an original perspective into the tragedy. It’s a quiet two-hander, understated to a fault, which focuses on friends rather than lovers, with a strong poetic vein that makes it elegiac and thoughtful.

Carl and Jody use make believe to protect themselves from the world outside the map shop that the play is wholly set in. Carl pretends he has the jobs of friends who have died while he mysteriously collects old chairs. Jody lies about having an HIV test. Both men use fantasy entirely transparently so, when truths escape, they have a haunting quality.

There’s whimsy in Dietz’s script that increases its novelty. Inspiration for the humour is credited to Eugène Ionesco (he wrote Les Chaises, read by both characters) and another similarity comes with an aversion to exposition. Both are factors that can excite but also create frustrations – if you come to the play cold it would take a while to work out what is going on. But Ian Brown’s direction appreciates the show’s delicate tone: his sympathetic approach and control increasing its credibility.

Dietz’s dialogue is nimble. There are plenty of ear-catching moments such as Carl’s “3am thoughts” or his questioning “the worth of me”. But the metaphors are uncomfortable: those chairs again I am afraid, each taken from the house clearance of a departed friend. And Jody’s ruminations on maps, with cartographers deciding on “acceptable distortions”. It’s all far too heavy handed.

Thankfully, the characters prove a saving grace for Lonely Planet. Reprising roles from the production’s première at the Tabard Theatre last year, Alexander McMorran plays Jody and Aaron Vodovoz is Carl. The performers’ close studies do the roles justice, propelling the script through some shaky moments. Just as their relationship is intriguing, both men are personalities you warm to and would like to know better. These are gay men who are proud, if not loud, and given authentic voices with interesting things to say.