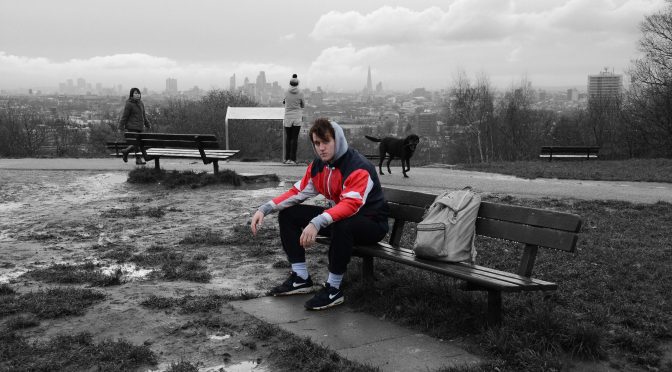 Harry Melling’s debut as a playwright, already acclaimed at the HighTide Festival and Off-Broadway, is currently running at the Arcola Theatre. The tragic story of a nameless, homeless youth, struggling with poor mental health and failed by social services, is an original and intelligent work. With its finger on the pulse of our times, Peddling feels filled with an urgent energy that demands our attention.

Melling’s writing is poetic and, at almost an hour long, his play, in which he stars as the sole performer, is an impressively coherent achievement. The script may not carry the emotional punch you might expect from its subject matter, yet it is raw and unsentimental, clear and ambitious, taking on big issues of inequality in our society. The poetic elements work perfectly to reflect the protagonist’s confused mental state, injecting a good deal of tension in his potential for violence.

Working with director Steven Atkinson, it’s no surprise that Melling brings an extraordinary commitment to his own writing and performance. It’s intense, yes, but also unusually sincere. And Atkinson’s staging, placing the action within Lily Arnold’s startling design of a transparent box suggesting a cage, creates an uncomfortable intimacy, which adds to an already powerful night of theatre.