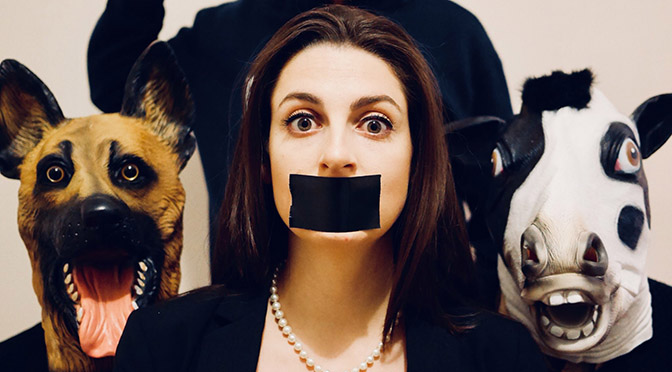 The works of recently deceased Italian playwright Dario Fo are seldom performed in London these days, so a chance to see his bizarre blend of farce and politics should usually be seized upon. This mid-80s story of a kidnapped media mogul shows off his distinctive writing and indicates his work’s influence. The adaptation by Stephen Stenning is credible, if light on satire, with some nice touches to relocate the play to the UK. Stenning captures a crazy spirit that plays with an audience, which should lead to an invigorating anarchy. Unfortunately, the production itself is not a success.

Po’s work referenced commedia dell’arte, a tradition admittedly difficult to translate. But the bungling criminals here come too close to Punch and Judy. There’s no grace, no finesse that might lead you to relax and laugh – instead the show becomes difficult to watch. The role of a clergyman is similarly tricky. In Italy it might pack a punch, but Jake William Francis’s depiction is too timid. Having a man play Diana’s mother is smart, putting him in a twin set and pearls OK but in the role – and in heels – Brian Eastty looks so uncomfortable it is painful.

This is an ambitious play, with electrocutions and an exorcism. Ironically for a piece that sets the rich and the poor against each other, plenty of cash might have helped. Without strong technical backup, any production is going to struggle. But making excuses is patronising. A lot of the comic timing is off, and the physical comedy poor. The jokes aren’t bad… but I didn’t laugh once. Elena Clements does well as the lead – she’s a confident performer who suits the role – and Nicholas Bright impresses as his part in the plot twists and turns. There are dark, sexy, undertones that could challenge and disturb, but director Michael Ward seems happy to leave the play as a comfy comedy. And the biggest problem is that the pace is too slow, waiting for laughs that don’t arrive. The audience shouldn’t pause for incredulity to set in – here gaps are plentiful and the result awkward.