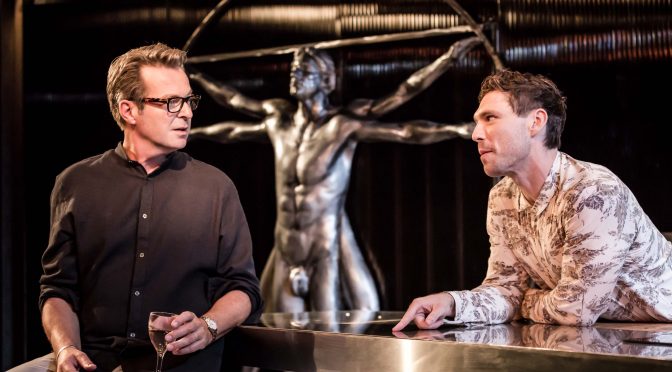 Playwright and lyricist Stephen Clark’s last work has received a posthumous premiere under the scrupulous guidance of his friend, director Christopher Renshaw. The play is a dark fantasia on sex and death that has two strangers playing with ideas of intimacy and oblivion over a nice dish of pasta.

The main attraction is the casting of Julian Clary as a host with homicidal tendencies. Clary is to be applauded for trying something so different – his character is a model of repression, maybe never quite scary enough, whose vulnerability develops in fits and starts, and he makes a good stab at depicting a brittle, intelligent and traumatised man. All while cooking on stage.

Yet Clary is a Comedy Great (capital letters, please) and everyone wants him to be funny. The humour in the opening monologue contains flashes of excitement. And yes, like Just A Minute, which Clary contributes to, there’s a passage without repetition, deviation or hesitation that would make Nicholas Parsons proud. Trouble is, the comedy overshadows the play’s serious intentions.

As for the play’s dinner guest, with desires and a history just as troubled as the chef’s, it’s a role James Nelson-Joyce excels in. Exuding confidence and complexes, he even makes his character’s bizarre chat-up lines convincing. The trouble is, both characters are too close to being simply vehicles for ideas.

Leaving aside the weaker scenes of the couple’s meeting –flashbacks both performers handle well – the challenge is Clark’s verbose articulacy. The style works for monologues: written in verse, the language is entertaining and its extravagance engaging. But when the men converse it starts to sound silly, laboured and insincere. Some outrageous comments – mostly focusing on necrophilia – are contrived and don’t fit with the play’s larger concerns. Several ideas, mixing pop culture with high-brow flights of fancy are far-fetched. It’s a shame to speculate that some excesses might have been avoided had the much-missed playwright been at rehearsals.