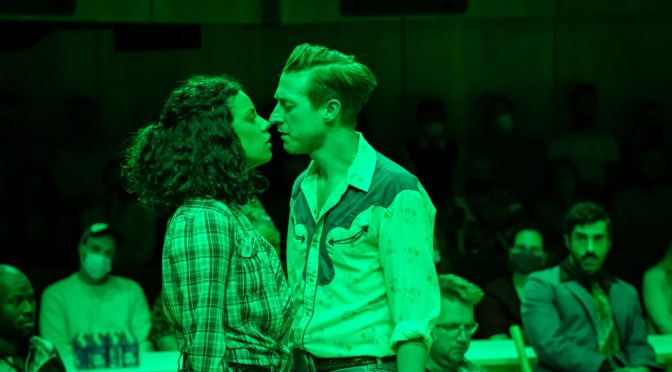 Setting down some of what happens in the Rodgers and Hammerstein classic might help with appreciation of this new production. Remember, the romance between Laurey and her cowboy beau Curly includes an auction for her affections (those lunchboxes are fooling nobody). And Curly’s rival, Jud, is a sinister misfit afforded a vigilante trail upon his death. While many just love Oklahoma! It isn’t hard to see that the show is, as they say nowadays, ‘problematic’.

Whether you share concerns about the plot or not, what directors Daniel Fish and Jordan Fein do for this revival, which took a Tony in 2019, is fascinating. There’s a brooding air to the action and considerable tension – much of it from Scott Zielinski’s superb lighting design –that’s sure to take any audience by surprise. By highlighting Jud’s mental instability, all the characters become more interesting and the piece more nuanced.

Maybe the production isn’t quite as edgy as it aims to be. John Heginbotham’s choreography is desperate to appear outré. Blackout scenes and live video feeds feel self-conscious and ultimately pointless. But the basic idea of showing problems behind the optimism of the original is great. And the cast – Anoushka Lucas, Arthur Darvill and Patrick Vaill, as Laurey, Curly and Jud respectively – embrace the fuller roles superbly with impassioned performances that highlight strong acting skills.

Adding more sex and a more knowing humour is the production’s forte. There’s real passion between Laurey and Curly, indeed the whole soon-to-be State seems brimming with sexual tension. How these women handle corncobs, let alone the innuendo throughout, is brilliantly done. The second love story, another triangle with Ado Annie, Will Parker and Ali Hakim is a real joy. Performances from Marisha Wallace, James Davis and Stavros Dimitri come close to stealing the show.

All this and no mention of the music? Here is surely the biggest surprise. A stripped-back score, arranged by Daniel Kluger and supervised by him and Nathan Koci (also credited with additional vocal arrangements), is Oklahoma! as you’ve never heard it before. Injecting a country music feel along with a touch of rock is all a long way from the sweeping romance you might expect. But the music is expertly delivered and appropriate to the project’s exciting freshness as a whole.