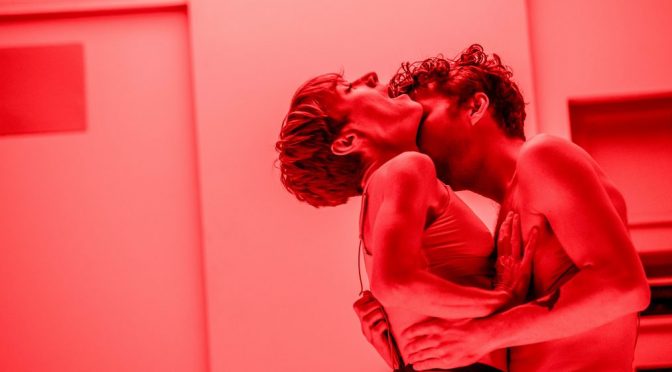 Reading Stanisław Lem’s science-fiction classic as preparation for this theatre trip, the book struck me as full of brilliant ideas but impossible to stage. The titular planet is as much the subject of the novel as the scientists who investigate it. Lem’s description of a global organism that (somehow) thinks, and creates giant structures from its ocean waters, has to be left to our imaginations. Adapter David Greig’s clever move is to refocus the book towards the emotional drama (incidentally, not Lem’s forte) that arises when the investigators make contact with this alien life-form.

What goes on has plenty of dramatic potential. The scientists have “visitors”, recreations from their memories, who are loved ones long dead: the lead, Kris, is united with an old flame, Ray, while her colleagues are haunted by their mother and daughter. Greig fills out Lem’s scenario nicely but the structure he opts for feels too cinematic – Solaris has been filmed twice – and director Matthew Lutton embraces just that with too much vigour. It’s technically impressive, and Paul Jackson’s lighting design is excellent, but it isn’t just a question of taste that makes me question this filmic quality. Compare the frequent short scenes, which at first provide drama but become tiresome, with that of a drinks party for Ray (pictured above) – a fantastic addition, given time to develop, and far better suited to the stage.

Kris is the narrator in the novel, which leads to a major role performed by Polly Frame. But opening out the story means that Greig does not give her quite enough to work with. Frame shows terror and joy well but there’s little in between and she fails as any kind of sceptic. Jade Ogugua and Fode Simbo play her colleagues: as deep thinkers, the characters bring out Lem’s ideas, but the performances fail to create an emotional resonance. Kris’s visitor Rey has a much meatier role that Keegan Joyce tackles with gusto. The strange state of his almost-human character becomes as moving as it is fascinating. The best performance comes on film as Hugo Weaving establishes his character’s excitement at the scientific discovery being made.

Designer Hyemi Shin keeps the novel’s 1960s sci-fi aesthetic. It’s appealing enough, although all that video tape might puzzle younger audience members, and enforces the production’s stylish appeal. But the show doesn’t engage with science quite enough. No matter how rattled by events, the characters on stage aren’t given the chance to convince us that they’re professionals. One key scene has liquid oxygen kept at the kitchen sink. I’m not sure who, apart from Heston Blumenthal, would risk that.

More seriously, the production unravels towards the end. Like the scientists who study Solaris, the book’s cult following attracts interpretations. It’s all part of the fun and Greig’s input comes with ecological fears and a touch of the Pre-Socratic Thales that highlights the theme of water. Both are interesting enough but arrive too late in the show for satisfactory exploration. The ideas form part of a truncated finale that ignores the adaptation’s strength – its emotional impact. Despite some rich investment from its whole creative team, the abbreviated conclusion means this Solaris ends up as short-change sci-fi.