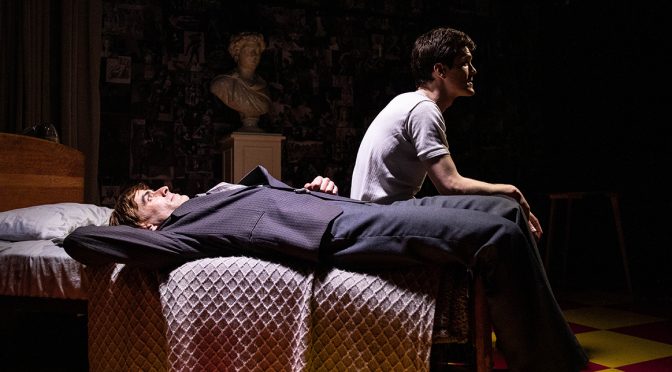 Few doubt Joe Orton’s plays are brilliant and important. But to judge from his diaries, which John Lahr uses for this play, he was a pretty awful person. Lahr’s strategy for success, shared in this admirable revival, is to make someone so unpleasant good company – at least for a couple of hours.

George Kemp takes the lead as Orton and has no choice but to carry the show. It’s Orton’s voice, after all – monotonously so – and Kemp manages to bring an impish humour to proceedings. Orton’s self-presentation is so forceful, with so little self-doubt, that the show teeters towards repetition.

To the credit of Lahr (and Orton), there’s no censorship of any kind here – the idea that this is a political or philosophical point is interesting. Orton’s offensive approach to sex tourism isn’t hidden, and his misogyny, racism and arrogance throughout are uncomfortable. How much a wicked sense of humour excuses any of this is up to you.

Almost despite Orton, Diary of a Somebody is really the story of two men. Orton’s partner (and killer) Kenneth Halliwell is awarded a detailed depiction, performed here by Toby Osmond. The play’s emotional moments are effective. Osmond makes sure his character’s struggles with mental health receive more sympathy from the audience than they did from Orton.

The couple are joined by Jemma Churchill, Sorcha Kennedy, Ryan Rajan Mal and Jamie Zubairi playing all the other characters. Marshalled efficiently by director Nico Rao Pimparé, it is the ensemble that makes the show digestible. Playing Orton and Halliwell’s neighbours is fun for both women. Delivering the brilliant letters Orton wrote under the pseudonym of Edna Welthorpe is a highlight for Churchill, and Zubairi’s Kenneth Williams is a pleasure.

Maybe Orton was too honest for his own good (or, at least, for his reputation). He wanted to make sure his work and life contained “no fucking asterisks”. We can all appreciate that. But there’s a strong sense from Lahr’s work that these diaries were always meant to be seen. How suspicious does that make us? Orton never hid them from Halliwell, for a start, and the latter’s sense of being “an extra” in his former protégé’s “epic” became a tragedy for both men. Orton’s tone is often pompous, if fascinating – credit again to Kemp for ensuring a light touch to their delivery. It’s easy to admire this play and production, if not their subject.