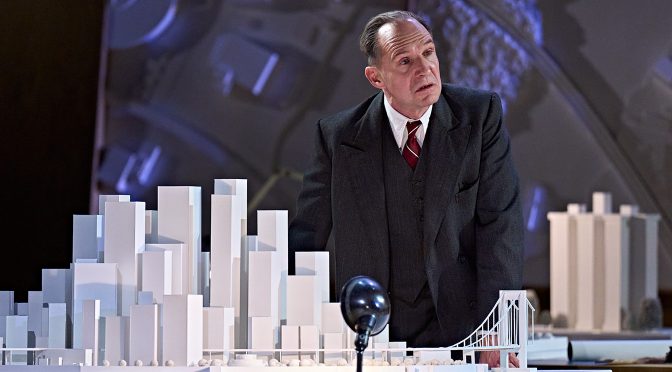 You might not think town planning is the most interesting subject for a play, but David Hare makes the most of it. Tackling the career of Robert Moses, ‘the man who built New York’, Hare elaborates themes of the state versus the individual, as well as the nature of aspiration and ambition, in this tale of parks, recreation and roads.

The history is interesting – honestly – but the key to Straight Line Crazy is character. Hare’s biography of Moses is what makes his play. And it provides a stellar role as the starchitect Moses for Ralph Fiennes.

On the side of the angels

Fiennes has the charisma to depict the maverick Moses, making him suitably magnetic as well as complex. That this is a man with a mission is an understatement. The drive to constantly build kept Moses in motion for 30 years. But his desire to improve the lot of many, by giving them access to fresh air and the countryside, is more complicated than it seems.

Using the methods of the devil

Moses stopped at little to get what he wanted. Fiennes conveys the astounding arrogance of the man convincingly. A viciousness that disregards how anybody else feels is enforced relentlessly, and the performance is suitably powerful. But, too often, Hare treats imperiousness as a joke. And the punchlines are poor.

The show is hampered by some unstable accents (even Fiennes’) and too many characters are simply shadowed by the central role. Moses’ assistants (played by Samuel Barnett and Siobhán Cullen) are an effort to correct this fault but aren’t well-rounded characters.  Even Danny Webb’s crowd-pleasing Governor is only an amusing foil.

There are more problems I’m afraid, which even Nicholas Hytner’s confident direction cannot hide. After the interval we only see more of the same. Yes, Moses faces objections to his plan of driving a road through Washington Square Park. But getting so much building done was never going to be easy. An obsession with cars starts to be questioned. And Hare highlights that the plans’ new opponents are middle class – claiming they are more organised and powerful than the big business names Moses took on earlier in his career.

The conflict is, dramatically, a repetition. We’ve seen the arrogance and determination already. Attempts to highlight the personal toll Moses’ work took arrive too late. Like the traffic on the roads Moses was obsessed with constructing, Straight Line Crazy just doesn’t go anywhere.