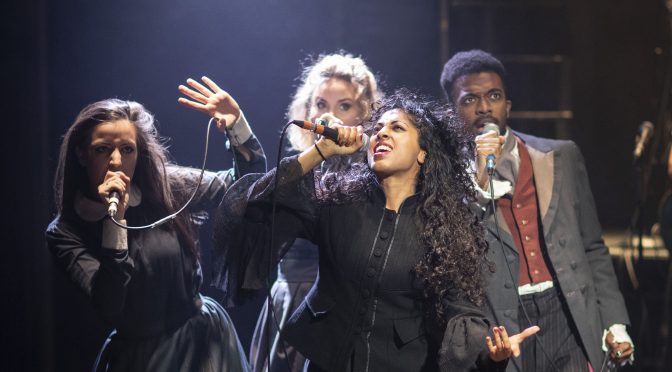 It’s not the fault of this strong show, a rock musical about the Brontë family, that it’s playing at the same time as another new piece called Six, which recasts the wives of Henry VIII as a pop group. Both musicals infuse history with a modern sensibility – and a lot of attitude – so maybe the more the merrier. To be clear, both shows are strong and exhibit exciting new promise from British talent, and comparisons shouldn’t be overstated as the pieces have different ambitions. But while Six is sharp and snappy, feeling like an exciting breakthrough, Wasted overreaches and comes a bit of a cropper.

The performances are all excellent. Natasha J Barnes takes the lead as Charlotte, dealing well with the clumsy flashback device of an interview and really belting out the songs. Molly Lynch is a prim and proper Anne, who also sounds great. Siobhan Athwal’s Emily, an eye-catching and committed mix of Kate Bush and Lady Gaga, proves hugely appealing. And the show has a lot of Branwell, performed with a deal of charisma by Matthew Jacobs Morgan. There’s some dissonance in the direction from Adam Lenson; it’s not quite clear how funny Wasted is supposed to be. Athwal gets a lot of laughs and Branwell is primed for them, yet the piece consistently veers towards gravity, even grimness.

There’s a great score from Christopher Ash. Heavy on rock, with plenty of passion delivered courtesy of Barnes and Lynch, with a bit of punk thrown in, Ash writes the best kind of pastiche. A comedy number for Emily recalls Kate Bush very cleverly while Jacobs Morgan’s smoother vocals are utilised well. Yet each song is just that little bit too long, too emphatic and too insistent. And Ash is not well served by the lyrics from Carl Miller, which seldom rise above the pedestrian. Miller gets a lot of information in, but there’s more prose than poetry here and attempts at humour are poor.

Tackling all four lives proves too much. It’s not that the show is too long but that Miller’s book becomes repetitive. The doom and gloom of the Brontës’ lives takes too much of the first act. And then they die. Fitting in a couple of songs about their work along the way is probably essential (although these are the weakest numbers). Presenting Branwell’s death as so literally a the result of his sisters’ success, then Emily’s collapse because of cruel critics, proves frustrating. Trying to tie all this together is the title – that the family saw their lives as wasted in one way or another – which isn’t quite enough. The show itself couldn’t be described as a waste in any way. But several ideas need reconsidering to give its subjects, and the talents of its cast and crew, a proper outing.