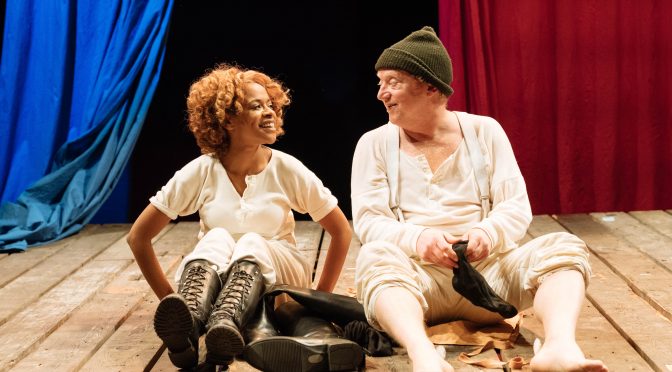 There’s no need to worry about any tricky starter-for-ten questions on European history here. This adaptation of Simon Leys’ book simply speculates that the French Emperor escaped from his prison on St Helena… then lived out his life selling watermelons. It’s a crazy comedy that’s a lot of fun.

The Told by an Idiot company is transparent about the construction of a theatrical piece. When it comes to emperors and clothes, the deceptively rough and ready treatment works especially well. As sweet as it is clever, Michael Vale’s rocking stage, the basic props and even the audience participation create a sense of good cheer.

The show has a camaraderie that’s carefully fostered by director Kathryn Hunter – you want to laugh along. The expert comic talents of Paul Hunter, who plays Napoleon, are the key: combining slapstick and quick gags, his physicality is remarkable. Alongside, Ayesha Antoine takes many roles, all capably, then excels as Ostrich – the woman who falls in love with the diminutive despot.

The comic timing from Hunter and Antoine is as good as any stand up and, for a while, it feels as if humour will be an overpowering fillip. But this alternative history is an efficient way to look at a man (any man?) with an inflated ego and examine what happens when status and accolades are gone. Since being Napoleon is such a common grandiose delusion, our hero here doesn’t stand a stand a chance of resuming his former life – cue the single best moment of audience participation I’ve seen, when it dawns on Bonaparte that nobody will believe him. It’s a laugh to watch his new humdrum existence, even his frustrations. And, as his love for Ostrich develops, the play becomes surprisingly moving, making this quirky comedy a satisfying show that’s a towering success.