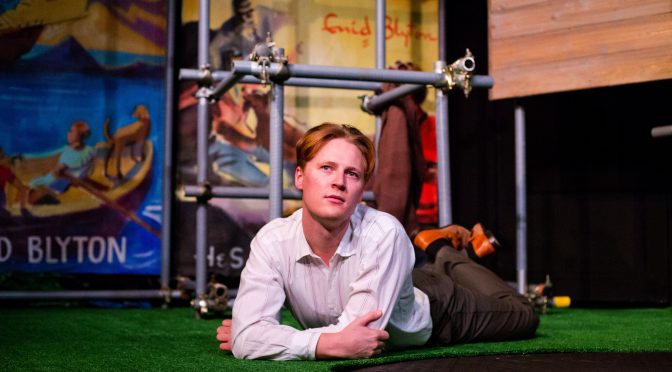 A children’s picnic bench and climbing frames are an apt setting for Peter Hamilton’s new work. This is a playwright at play, with an outrageous scenario of book clubs and butchery. Playground is murder mystery, peopled by oddballs, with a wicked sense of humour.

Two peculiar policemen are searching for a child killer. Meanwhile, our prime suspect (Richard Fish) recruits the mentally ill to discuss Enid Blyton books. It’s part of a plan to join the middle classes… somehow. Laura Garnier and Simon Every make the most of their roles as psychiatric patients: Tamsin’s a communist and Stuart a genuine member of the proletariat (always a tricky combination). And Josie Ayers has a great turn as a suicidal, middle-aged misfit with a morbid sex drive. Oh, and there’s a café owner (Sarah Quist) singing nursery rhymes, called Lizzy… or is she? It’s all a bit of a puzzle, but the jokes stop you from taking it too seriously.

There are a lot of ideas here (mostly about mental health), and a stubborn resistance to shape them. Themes are lost in these comic creations – the evening really works as a series of sketches. Director and designer Ken McClymont handles the cast well, but if anyone has a clear idea of what’s going on it doesn’t come through.

By the time the policemen reappear, one of them in drag, I’d relaxed into this tastless, off-beat comedy. Dan MacLane brings a lovely deadpan touch to Detective Mitchell. His lust for colleague copper Birch, Christopher James Barley, making the most of those climbing frames, is deftly done. As a kind of conclusion, Stuart expresses a hope that one day man will live on Mars. Hamilton is already off in space if you ask me, but he can make you laugh whatever planet he’s on.