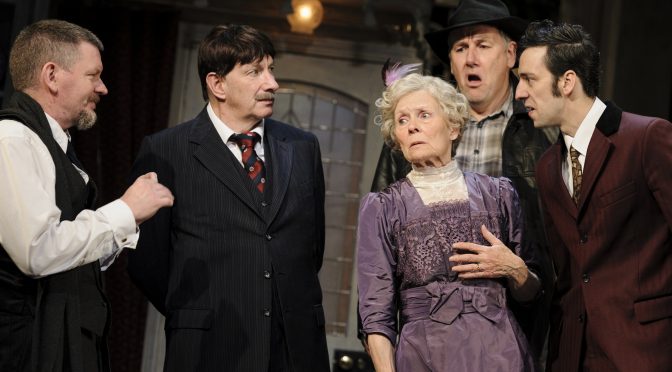 The Ladykillers are back. After last year’s super-successful run, with the show nominated for five Olivier Awards, a fresh cast has taken over the show, now playing at the Vaudeville Theatre. Father Ted writer Graham Linehan’s adaptation of the Ealing Comedy, from 1955, is respectfully inspired by the much-loved film. Its central premise – a group of incompetent villains determined to try and do away with their little old landlady after she discovers their heist ­– is employed skilfully to create a clever comedy.

It’s a light affair, with just a touch of farce, and although slapstick is used effectively, it’s the quantity and quality of one-liners that stands out. And the superb characters. Everyone will have their favourite for sure, but Ralf Little brings real energy to pill-popping wide boy Harry, and Simon Day steals many a scene as the confidence man with no confidence, Major Courtney. Few people can suggest transvestism quite so amusingly as Day – it’s a rare skill indeed. Holding the whole thing together, as the criminal not-so-mastermind Professor Marcus, is John Gordon Sinclair; spot on the button with his comic timing and with an air of improvising that makes everything feel fresh.

It is the set and costume designer Michael Taylor’s work that impresses most. A proper ‘look at that’ stage, full of gizmos and gags, that really adds to the show. Working on its slopping surfaces must be oddly disorientating but the cast make it look jolly. Wickedly, it’s hard not to laugh at the very idea of assassinating Angela Thorne’s gorgeous granny Louisa Wilberforce, and the crooks failure to do so brings yet more invention from Taylor’s set – there’s even a railway tunnel at one point. The Ladykillers is free from twee and manages to be perfect family fun throughout – even for your grandmother.

Written 10 July 2013 for The London Magazine