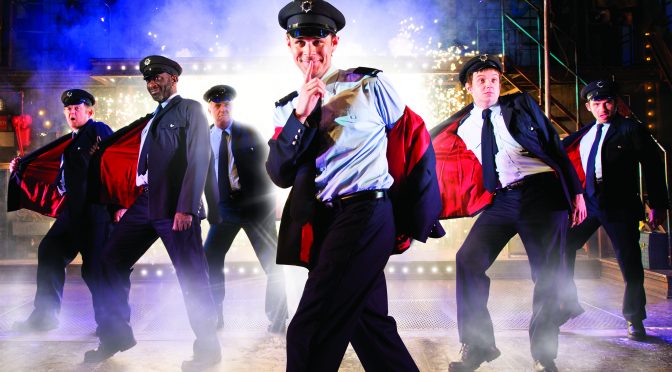 Already a triumph in its hometown of Sheffield, The Full Monty received its London premiere last night. Adapted by Simon Beaufoy from his own hugely successful 1997 screenplay, this is yet another safe bet for a West End hit. It’s all about auditions at the moment, and this well-loved story of unemployed steel workers who decide to become strippers deftly uses rehearsals and try-out tribulations to build to the (quite literal) denouement. It’s so well done, in fact, that any cynicism is blown away: this is a terrifically fun show with a big heart that London should love.

On a technical level, The Full Monty is a masterclass in direction from Daniel Evans. He’s always a treat to see on stage as an actor and, with a string of achievements as artistic director at Sheffield Theatres, he has firmly established his talents behind the scenes as well. Here he excels, pacing the show perfectly, balancing its humour with emotional impact.

Evans has secured superb performances from his talented cast. Kenny Doughty leads as charismatic lad-about-town Gaz, desperate for cash to pay maintenance so he can see his son. Roger Morlidge gives a sensitive performance as his cumbersome best friend, and there’s a cracking cameo from Rachel Lumberg as the latter’s wife. Their former foreman-turned-choreographer is played with satisfyingly dryness by Simon Rousse, the only Conservative voter in sight. To suit broader tastes there’s fine work from Sidney Cole, Craig Gazey and Kieran O’Brien, who is accompanied by a gasp-worthy prosthetic addition.

Of course it’s crude – it’s about strippers after all – and some jokes show their age. A couple of scenes carried over from the film are weak, simply feeding a desire to see the movie recreated on stage. More impressive are new touches; an expanded exploration of a gay relationship and the use of Robert Jones’ nimble set, which sees cranes, girders and sparking machinery used to great effect.

The laughs are plentiful but, beyond the giggles, Evans uses Beaufoy’s scenario to explore all manner of sensitive issues, from gender roles to unemployment. This celebration of men of all shapes and sizes is a real make ‘em laugh, make ‘em cry treat with plenty to think about. In fact, it’s a refreshing blast of Northern wind.

Written 26 February 2014 for The London Magazine