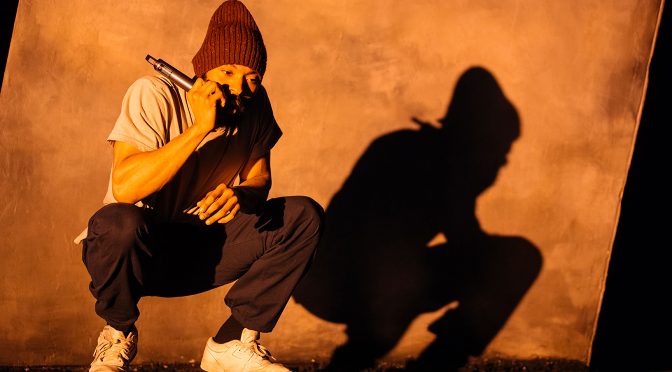 There are two sides to Arinzé Kene’s hit transfer from the Bush Theatre. It’s the story of a young criminal who attacks someone on a night bus. And it’s the story of Kene himself, writing the show and defending his art. While one character is on the run from the police and ruminating about the home he may be forced to leave, our author is questioning whether his story perpetuates stereotypes and angry at the responsibility writers of colour are burdened with. Mixing the stories together makes for an original work whose rave reviews testify to its popularity.

The show’s novelty, all the more impressive now that it’s in the West End, is to combine songs, poetry and spoken word. It’s called ‘gig theatre’, and director Omar Elerian deserves praise here, as it would be easy to feel lost. And designer Rajha Shakiry, working with lighting and video from Jackie Shemesh and Daniel Denton respectively, produces visuals worthy of any art gallery. Along with the singing and acting skills of Kene himself, there’s a suspicion that performance and production are slightly better than the play. No matter, as the show works superbly.

Misty is unmissable for its central performance: Kene has real star quality. This isn’t a one-man show, and there’s strong support from musicians Adrian McLeod and Shiloh Coke, who also appear as friends of the playwright. And a superb role for a child actor as Kene’s older sister (not sure why). But all eyes are on Kene and there’s seemingly nothing he can’t do, whether cry or laugh. His physicality is remarkable and his singing voice unique.

Back to that parallel narrative – the making of the play and the story itself. My preference was for the simpler. The tale of Kene’s intriguing friend is moving, in particular scenes imagined with his sister. When it comes to the process of making the play, the issues raised are valid and important. But that this introspection becomes anguished and intrusive – which is part of the point – is nonetheless frustrating. The traditional narrative could be developed so easily – omitted details are much needed – and it would have been great to see more. But that’s another demand on the writer, hopefully sincerely motivated on my part. Kene’s point is about artistic freedom and, given the achievement here, it’s difficult to argue with him.