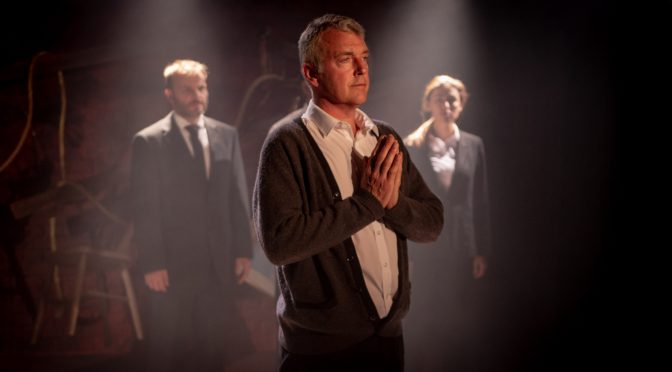 State of the nation plays have their admirers but the aims of large narratives and big claims can backfire horribly. Seamus Finnegan’s new play, presenting a history of the troubles in Northern Ireland alongside contemporary politics in the Republic, falls victim to its ambitions on both counts. The collection of brief vignettes are unsatisfying in isolation and fail to cohere into a big picture.

Amongst many plots mangled we meet old friends at a funeral, a family coming to terms with their daughter’s vocation as a nun and a priest stabbed in a racist attack. All rammed together in a breathless effort to examine history, sectarianism, the church and immigration. Arguably any of these stories could be developed, but each contains improbabilities, most notably a former terrorist surprised by the amnesty in the peace process.

It’s a shame the brief scenes deny the cast the chance to shine. In particular the hard work of Shenagh Govan, entering and exiting at speed, is wasted. Angus Castle-Doughty and Richard Fish do well playing various psychopaths and Euan Macnaughton struggles valiantly recounting a life as a terrorist. But these are brief moments not worth the wait. All the performers take on many roles but rather than impress, several casting decisions come across as desperate (if Jerome Ngonadi as a Mother Superior was supposed to be a joke I am afraid nobody was laughing).

Ken McClymont’s direction does nothing to aid the play. Adding songs and constantly moving around chairs between scenes becomes interminable. And some cheap costumes don’t help either. A final problem is Finnegan’s dialogue: full of facts characters must know and downright nonsense, Finnegan can’t even reveal a location without being florid. The vocabulary is unconvincing – someone uses the word harlot sincerely. When all else fails, a character is made to scream. The subject of Ireland and religion should be a fruitful one for a playwright but this is theatrical purgatory.