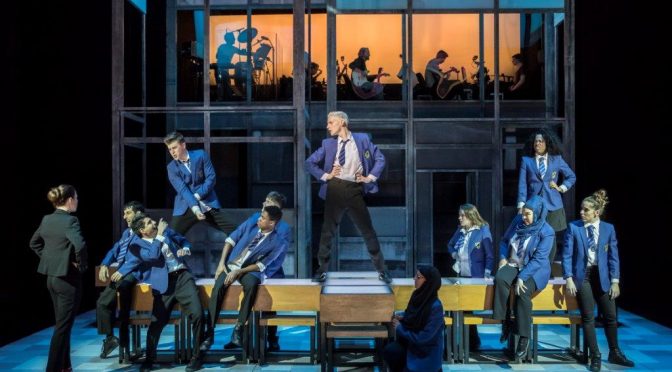 This topical coming of age story won the critics’ heart at its Sheffield Crucible debut. Producer Nina Burns was an instant fan, too, and brought the show to London pronto. Although it doesn’t stand up well to scrutiny, it’s hard to be cynical about a school boy drag queen and a triumph of individuality over adversity. With its welcome diversity this is a true tale for our times and feel good fantasia.

The show has created an exciting new star – John McCrea – who takes the title role. The raving for McCrae is spot on, his stage presence and voice are remarkable; when Jamie acts like a star he makes you believe he is one and, best of all, his precocity is established without betraying the character’s youth and immaturity. For Jamie is obnoxious and self-obsessed – his drag queen name of Meme Me tells that much – yet McCrea manages to make him irresistible.

The ensemble is excellent: especially Lucie Shorthouse, as Jamie’s best friend Pritti, and Mina Anwar, as logical family member Ray. That McCrea carries the show is the fault of the piece rather than his fellow performers. Seeing so much from the central character’s perspective makes the show shallow. There are other great characters here and we should see their stories rather than just have them defined by Jamie.

Although it probably won’t bother many people, this is a collection of songs by Dan Gillespie Sells rather than a real musical. But many of the songs are good, a couple are memorable, and all are well performed. Monotony almost creeps in; too many numbers are mawkish and too many are solos or duets. The lack of songs for the chorus is surprising, given the strength of the cast, and provokes a sense of talent underused.

The oddest decision comes with Tom MacRae’s book. While his lyrics depict working-class life in Sheffield well, and there are some good jokes, the dramatic stakes are downplayed. There’s Jamie’s unbelievably supportive mother (an excellent performance from Josie Walker) and tolerant class mates – just the one school bully? Jamie does face prejudice, but it never feels enough of a threat. Maybe the theatre is the right place for this kind of wish fulfilment – it certainly makes for an enjoyable show – but tension is lacking. There’s no sense of debate or argument, just a token baddy and a school teacher who comes around eventually. The ironic result is a musical with a bold statement that is welcome, but leaves little to talk about.