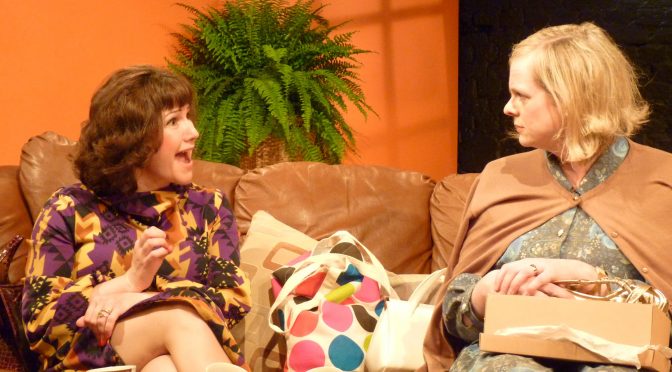 Producing Alan Ayckbourn’s modern middle-class drawing-room drama beneath a railway arch is a fairly brave act. But the Union Theatre in Southwark is a fringe venue not known for its timidity – with some excellent results. Thanks to impeccably sourced props from designer Holly Best we are back in the 70s in a well-appointed home and, with director Ben De Wynter in charge, ready for a deliciously poignant comedy of manners.

Absent Friends is the story of three couples preparing to meet with an old mate who has recently suffered bereavement. Giles Fagan plays the mourning Colin in a suitably perky manner, for Colin has learned lessons from his tragedy his luckier chums have missed out on, and consequently embraces life with a gratitude that makes the others look absent.

Chas. Early and Gillian McCafferty play Paul and Di, a couple on the edge, who fall apart on stage. McCafferty gives a brave, simply riveting performance while Early is slickly lecherous. His latest conquest joins them for tea and a lack of sympathy – Olivia Busby is the monosyllabic Evelyn and gets more laughs than you would have thought possible from a simple yes and no. To add to the embarrassment, Evelyn’s husband is present as well. Shaun Stone shows a talent not just to amuse but also to annoy with his nervous coin-jiggling curling toes. And finally there is Marge, on her own as hubbie Gordon is sick off stage. Fiona Gordon manages to let us all know it’s her character who is going to make the biggest gaffs – the comedy is no less sparkling when the promise comes to fruition.

De Wynter’s intelligent direction perfectly suits Ayckbourn’s subtlety. There are moments when this tea party becomes riotous, but Absent Friends isn’t a farce. Having couples argue over a eulogy just to score points against each other is painful, yet the humour also feels light. This production captures Ayckbourn’s gentle melancholy so perfectly it is strongly recommended. Make friends with the Union Theatre as soon as you can.

Written 1 November 2010 for The London Magazine