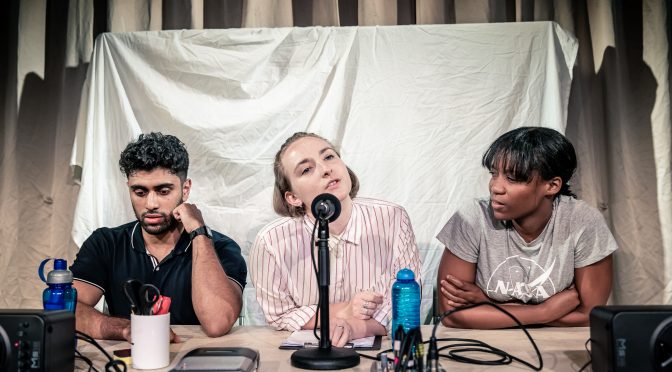 A hit at the Edinburgh Festival and the winner of an Untapped Award, Barrel Organ’s new piece is a comedy gem. With three fantastic performers, a topic ripe for satire is handled with wit and intelligence in a show full of surprises.

Rose Wardlaw takes the lead. As the audience sits in on a presentation about a famous photograph, she’s brilliant at muttering asides, her character too uptight for her own good. The picture hides a conspiracy that just keeps on growing – to Wardlaw’s exasperation. As the project gets more ridiculous, ignoring efforts at serious research, she gets funnier and funnier.

Azan Ahmed is the first to elaborate a further conspiracy. With a penchant for movie quotes, his character is downright sweet, and it seems cruel to laugh at his enthusiasm. The gullible energy and sheer joy at thinking he has discovered something new is utterly convincing and Ahmet manages to convert these qualities into something more serious as the action develops.

By the time we get to Shannon Hayes, we are in spoof territory. It isn’t a plot spoiler to say that the moon landings make an appearance. Best of all is the Elvis impersonation from Hayes, who gradually increases the mania in her performance with skilful calculation. It turns out she’s been playing a different game, the precursor for which is a streak of mischief that has added to the fun all along.

Devised by the company, with a text from Jack Perrin, pretending the trio are amateurs is a great idea to get a lot of laughs. Of course, delivering such fumbling around is tricky stuff and Dan Hutton’s direction is really as pin sharp as you could wish. The only problem – clearly indicated – is that conspiracy theories don’t finish, they just get bigger.

Trying to be serious too close to the end of the show seems a mistake. And a final tableau, where the characters inhabit their fantasy (well, that’s my guess anyway), proves too strange a change of key. Both give rise to the suspicion that the team didn’t quite know how to end things. I’ve no proof of that, of course – maybe photos or recordings of rehearsals will surface? Maybe someone overhead something? There must be a reason… Still, nothing can detract from a whole-hearted recommendation for a show that shouldn’t be kept a secret.