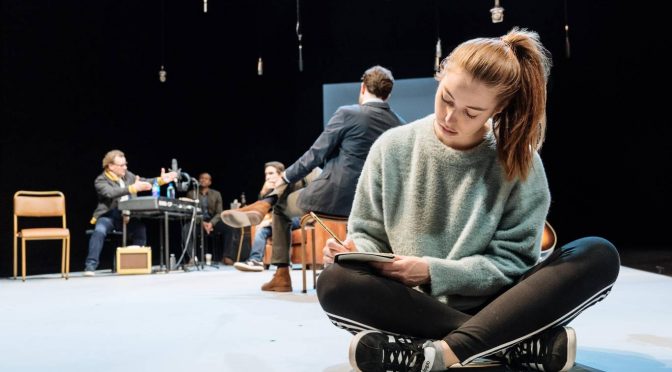 Ben Chaplin plays a successful record producer and Seána Kerslake an up-and-coming singer-songwriter who battle over creative pre-eminence in Joe Penhall’s new play. The roles make for good viewing: the unbelievable arrogance of Chaplin’s Bernard is as entertaining as the vulnerability of Kerslake’s character, Cat, is moving. And the contrast between their approaches to music, focusing on his obsession with “precision”, are dramatically effective. As their disagreements exacerbate tensions, and come to include undertones of sexual exploitation, the mood turns increasingly sour and the play comes to comment on our times. Given The Old Vic’s recent history, there’s piquancy to hear such issues here. But, although it isn’t Penhall’s fault – his big theme is who and how someone might own creativity – the topic of sexism in the arts is raised so obliquely it is discomforting.

The play is as much about the music industry as it is about the musicians. That this might excuse behaviour is offered as an explanation too many times. But Roger Mitchell’s direction and Hildegard Bechtler’s impressive set – with the stage reaching out well into the auditorium ­– make the connections between those making music and those behind the scenes clear. The creatives are overwhelmed, each having their own psychotherapist and their own lawyer. There are strong performances (from Pip Carter, Kurt Egyiawan, Jemma Redgrave and Neil Stuke), but all the characters are clearly there to prove points. A lot of what’s said – about artists and mental health or intellectual property and justice – is funny, a little of it thought provoking. Unfortunately, nearly all of it is predictable.

The writing, however, is stunning: the text has an impressive musicality of its own, conversations interweave and tone varies constantly. But, with depressing prescience, it’s all too easy to see what’s coming next. A flippant complaint from Cat is propelled into a criminal issue. That this is instigated and escalated by professionals who could potentially profit from her misery is an uncomfortable suggestion. There are some brave opinions expressed, alongside some pretty awful ones, and Penhall puts drama on the flesh of issues in a way that newspaper headlines can’t. But, despite its sharp subject matter, Mood Music is flat. For all the importance of these topics, the danger is that they don’t make good drama. For a general audience these trials and tribulations of the creative industries come close to solipsism; no matter how well Penhall vocalises this, it is a dreary sound.