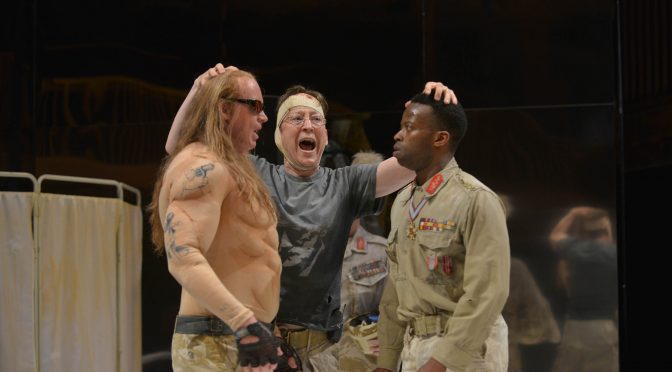 The World Shakespeare festival, which this new production of Troilus and Cressida at the Riverside Studio includes, has made audiences more familiar with radical versions of the canon. But this co-production between the RSC and the renowned American company, The Wooster Group, is staged in such a bizarre fashion, the play becomes confusing and alienating. It doesn’t help that the actors interact with videos mounted on big poles as they perform. This gives rise to seemingly erratic movements which have been prompted by the videos. Frankly, makes the whole show downright odd.

Co-directors Elizabeth LeCompte and Mark Ravenhill set Shakespeare’s Trojan war love story in an unspecified location with Native Americans against contemporary British soldiers. Sort of. The Trojans have futuristic costumes (by Folkert De Jong) and the British troops have a tendency to don drag. You certainly won’t be bored, but there is no balance – the play is made into a puzzle. It’s true that Troilus and Cressida is full of contradictions, but this company is obsessed with abandoning any coherence: the ideas and delivery may be eye-catching, but they add little humour or, more importantly, drama.

It is the actors who suffer most by this treatment with their performances reduced to bizarre cameos. Marin Ireland and Scott Shepherd deliver the title roles in a deliberately monotonous, stylised, fashion. Among the Trojans only Greg Mehrten’s Pandarus manages to break this spell by the force of his stage presence. The British contingent do better (maybe their delivery is more familiar), but Aidan Kelly’s WWF-inspired Ajax and Zubin Varla’s Thersites stubbornly reject any subtlety and quickly become annoying. Scott Handy has a better night of it as an asthmatic Ulysses, but his brief appearance as Helen is such bizarre casting, it jars. Most damning of all, Shakespeare’s text is delivered so differently that comprehension suffers. Whatever points that LeCompte and Ravenhill wish to make are unclear. Most of the plot is lost as well.

Written 31 August 2012 for The London Magazine