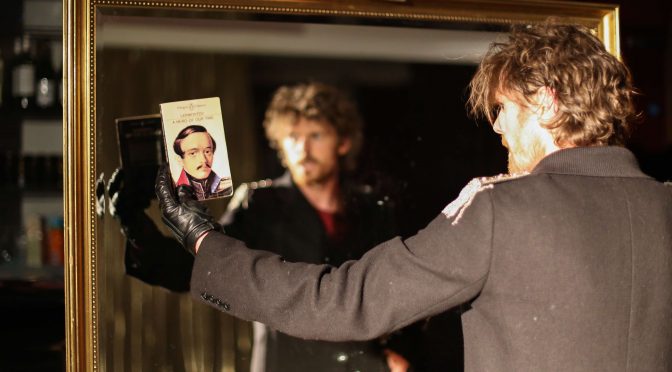 Director Vladimir Shcherban, of Belarus Free Theatre fame, only founded HUNCHtheatre in May this year and already has a hit with this startling adaptation of Mikhail Lermontov’s 1839 novel. Inspired by the Russian literary great’s experimentation, Shcherban stages only part of the book and isn’t shy of crazy touches, balancing Romanticism with modernism. In a romantic competition between military men for a princess, exaggerated passion and masculinity may be mocked, but the “passions, yearning and regrets” Lermontov explores are present and correct.

Oliver Bennett, who adapted the text with Shcherban, takes the part of Pechorin. The role is a fantastic creation that’s full of contradictions. Possessing a “rare sagacity”, Bennett does justice to the character’s epigrams, then drops cynicism for soul-searching in the blink of an eye. Bennett is a verbal virtuoso, delivery a manic narration that combines angst and deadpan humour. Pechorin’s competition is Grushnitsky (well, he’s outclassed from the start, really) played wonderfully by James Marlowe, who matches Bennett’s physicality throughout and gives the character great depth. Taking bites out of a lemon is the least of these guy’s achievements – and it’s more apposite than you can imagine.

The two women in the piece are played by Scarlett Saunders: Pechorin’s mistress, depicted with delicious faux-sophistication, and Princess Mary, whose attention the men fight over. Saunders is especially impressive if you consider that most of the time she’s reacting to the men’s descriptions of her character. This is an insistence that shows Shcherban’s brave grasp on his text; what we might consider a sexist shortcoming in the original is preserved to be lambasted.

As the fight for Mary develops from jest to deadly earnest, whether either man cares for her is carefully left open. Mary’s actions just have to fit with their strategy. A witty segment that has a film of Saunders lip-syncing to Whitney Houston is a case in point – it gives rise to a discussion about Kevin Costner’s status (clever, but might I suggest Britney Spears’ Toxic would have been good, too?). Of course, none of Lermontov’s characters come out of their adventures as heroes but, importantly Mary’s fate is highlighted with appropriate sadness. Along with its humour, a particularly sour taste emanates from the show’s finale – Shcherban has cooked up a wonderfully flavourful piece.