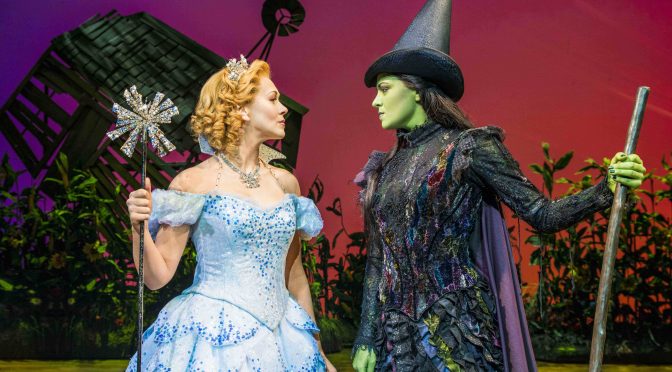 Blockbusting musical Wicked has now been running in London for seven years. The ‘untold’ story of the witches of Oz has been heard many times. There’s a danger with a show this big, and technical, that it becomes too mechanical – more like a fairground ride than a piece of theatre. The arrival of Jennifer DiNoia in the role of Elphaba, the witch who becomes ‘wicked’, injects a fantastic energy into the show that makes this a great time to see it.

Gregory Maguire’s prequel to the Wizard of Oz is a strong idea; a clever, playful twist on a story most of us have a connection with. Giving the famous characters more depth ensures strong material for the musical, and its book by Winnie Holzman, to work with. And there’s a satisfyingly moral content. Elphaba is bullied for being different, succeeds through hard work and refuses to accept the fascist state the Wizard has made of Oz – good girl. There are plenty of intelligent in-jokes and a fresh cynicism that appeals to adults in the audience – it has a fairy tale setting, but Wicked is the Pixar of musicals.

Stephen Schwartz’ score isn’t one of my favourites, but the songs that detail the relationship between Elphaba and Glenda, the good witch, are superb. DiNoia’s performance is rousing and Savannah Stevenson, as Glenda, does a great job with her big hit, Popular. The lyrics are the most uneven thing – some smart and funny but many predictable – nowadays making the Prince Charming character “deeply shallow” is predictable. It’s the production itself that makes the show, with fantastic sets by Eugene Lee, costumes by Susan Hilferty and wigs from Tom Watson; all creating a convincing world that’s worth escaping to – or from, of course, if your name is Dorothy… but that’s another story.