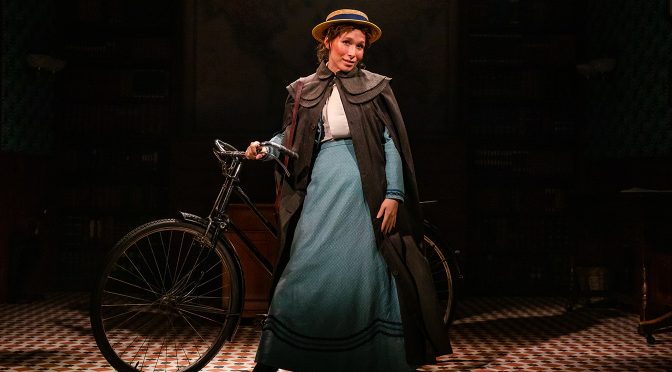 What a story! This new musical from Freya Catrin Smith and Jack Williams is about the life of Annie Londonderry (née Kopchovsky), who cycled around the world in 1895 and then became a journalist.

The clever book makes the most of her adventures and draws important points about privilege along the way. The device of Annie pitching to newspaper editors is skilfully managed by director Sarah Meadows, utilising Amy Jane Cook’s clever set and costume designs.

The music is good, maybe pleasing more than memorable. The score is eclectic with a light period touch. And the lyrics are excellent – not just for their superb geographical rhymes, but by being consistently smart, unshowy, thought provoking and easy on the ear. I haven’t heard new songs this good in a long time.

What a woman Annie was. As a working-class Jewish immigrant in America, the odds were against her. But Smith and Williams tackle her potential role as an inspirational figure intelligently… because Annie made some questionable choices and was a liar. Or at least a shameless salesperson, ready to sing Everybody Loves a Lie with a smile on her face. And the show is better for her cynicism – Annie’s tall tales feel like a present Smith and Williams enjoying playing with.

The character is a gift to a performer, too – what a role! This troublemaker and trailblazer is brought to the stage by Liv Andrusier doing a great job with those fabulous lyrics and enforcing the impression of a woman who is enticing and complex. It’s all energy at first, which Andrusier makes infectious. Then there’s swooning romance. And, as we learn more about Annie’s difficult life, great pathos. It’s quite the journey, but Andrusier makes it look easy.

Ride isn’t a one woman show. Joining in is Martha, played by Yuki Sutton. And how this second role is tackled is indicative of the skill throughout: the character is a device, but a supremely effective one. Drafted in by Annie herself to help tell the story, Martha takes on several characters, which gives Sutton a chance to impress: she plays two romantic interests, the French customs official Celine by far my favourite.

The clever part comes with how the playacting affects the character. By the end, Martha carries the show, briefly adopting Annie’s self-fashioned persona. This smart move suggests how role models work. Almost regardless of Annie herself, another young woman is now willing to put her foot down and pedal towards her dreams.

As for the show’s path, with a lead that’s a mix of Mabel and Dolly, with all that ambition and chops, someone needs to take this to New York. The sense of potential for the production is exciting – see it now so that you can boast about it later.