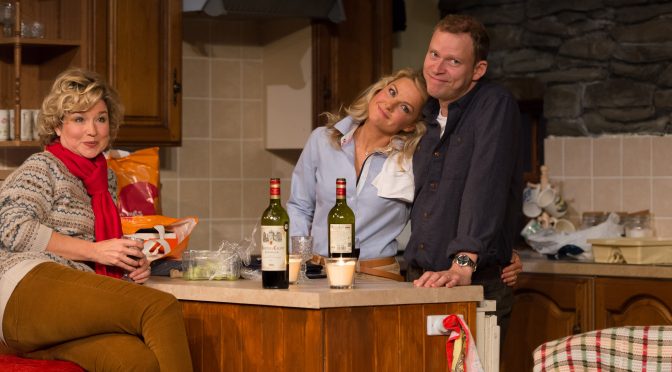 Three couples on a disastrous weekend away in Wales. This is the premise for Simon Paisley Day’s new play, Raving, which opened last night at the Hampstead Theatre. It’s a satisfyingly traditional set-up for a comedy of manners. Boasting superb performances as well as plenty of gags, it should prove another hit for a theatre that director Edward Hall is taking from strength to strength.

An actor himself, Day knows how to craft lines that will get a laugh, and the cast, all experienced comic actors, really capitalise on the script. Hall directs with just the bubbling suggestion of a farce, while keeping the pace appropriate to observational comedy. The couples are instantly recognisable ‘middle-aged parents with stressful lives’. You have a vivid impression of the homes and children they are taking a break from, and can easily imagine which part of London each lives in.

The first arrivals are the neurotic Briony and her sex starved husband Keith. Barnaby Kay makes his character instantly appealing and Tamzin Outwaite is tremendous, turning on the tears and irrational fears at a speed that’s hilarious. As teachers, Briony and Keith see themselves as lower middle class (I am sure that wasn’t always the case) and don’t gel with the better-off Serena and Charles.

The toffs of the play are the tops. Nicholas Rowe’s ex SAS Charles is a scream, bettered only by Issy Van Randwyk whose filthy laugh as Serena I wanted to bottle and keep. They have “four or five” children and just “leave them to it”. No parenting books in their library and they spend too much time in the bedroom, with Charles all over Serena “like German measles”, to read a lot anyway.

In the middle of the pecking order come Ross and Rosy. The seemingly perfect couple who “don’t do late” but do yoga instead. They have problems with au pairs. Robert Webb and Sarah Hardland deal cleverly with their unappealing characters. When the predictable breakdown happens and the raving really starts, it still feels edgy.

The piece has its problems. The introduction of a younger woman, a Sloane with a drug and sex addiction, doesn’t convince, even though the talented Bel Powell does her best. Similarly, the character of the farmer the couples rent a cottage from, while ably performed by Ifan Huw Dafydd, introduces less tension than desired. There are longueurs during the finale, as the couples sexual kinks and dependencies are revealed with a too-obviously confessional tone, but the performances are strong enough to keep the laughs coming.

Written 25 October 2013 for The London Magazine