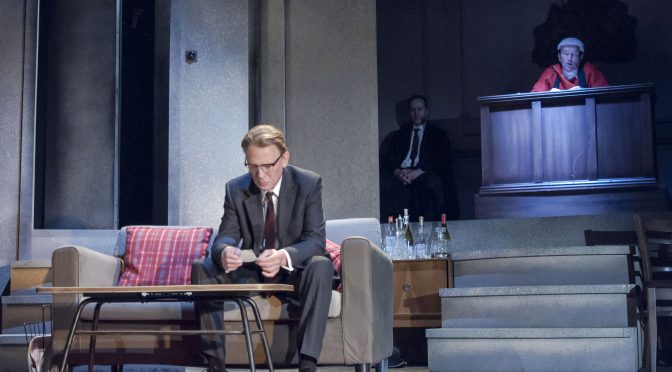 Now we know why Andrew Lloyd Webber selected Stephen Ward as the subject of his new musical –  a small production has beaten him into the West End – and reminds us what a fascinating character he was. In Gill Adams’ Keeler, the woman at the centre of the 60s scandal, the Profumo affair, takes the title and the play is based on Keeler’s own book. But it is Ward, a queasy-making anti-hero, who interests most.

The focus on Ward may well come from Paul Nicholas taking on the role. A strictly controlled performance adds to this enigmatic character: his motives tantalisingly unclear, his emotions ambiguous. A kind of pimp to Christine and other girls from Murray’s Cabaret Club, he uses women to advance himself with the establishment and the powerful. It’s more than creepy but we never doubt his charisma.

Unfortunately, Nicholas dominates too much. Other characters, including “the Minister of War and the man from Moscow” – Keeler’s lovers, John Profumo and Eugene Ivanovo – are sketchily written. In the title role, Sarah Armstrong fights hard to portray Keeler as more than a victim, but this results in little sense of how young and vulnerable she must have been. Through abortion and abandonment, to having her life threatened by mad lovers from Notting Hill, Armstrong conveys Keeler’s cool rather than the drama.

Sexual tension is conspicuously absent. Despite a couple of showgirls, who inject some feathered glamour, the uniformly odious male characters, with their talk of “botties and boobies”, make you squirm. Nicholas, who also directs with a thorough hand, aided by Charlie Cams’ neat set, is at his best as Ward is taken to court. Injecting a more serious tone, this scene almost grabs you. Laid bare for the law, you can see the story for the scoop it really was – sensational still.

Written 7 November 2013 for The London Magazine