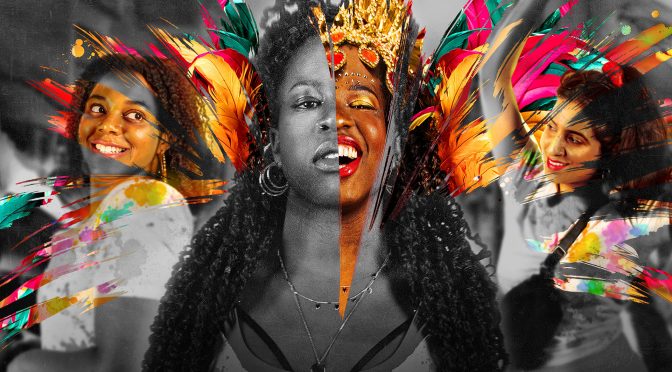 Although the Notting Hill carnival has been cancelled for the second year running, theatre-goers can get closer than ever to the spirit of the event with Yasmin Joseph’s play.

Using the specific term to describe the street party element of Carnival, Joseph opens up interesting topics, from cultural history to issues around class, gender, and race.

It’s not easy to raise so many issues so well. And Joseph doesn’t shy away from controversial tensions within and between groups that show complex legacies and lives. Expertly marshalled by director Rebekah Murrell, we’re given time to consider thoughts so skilfully provoked.

This all sounds serious. And J’ouvert is… As we follow two friends around for the day, there is plenty of menace and pain. Nadine is preparing to compete as a dancer and Jade about to give her first speech as an activist. Joseph balances a concern for heritage, where Nadine communes with the past (scenes that aid the show’s pace), and Jade’s passion for a better future (which ends, sorry for the spoiler, in a barn-storming speech). Both women’s passions add to the tension and, meanwhile, they are pursued by lechers and censorious relatives. But J’ouvert is also very funny.

In the spirit of release that characterises Carnival, plenty of the problems addressed benefit from Joseph’s ability as a comedic writer. There are throwaway observations that have spark and sometimes a spike, and there’s a line in insults that would make many of a stand-up comic envious. Having her cast impersonate men of different ages provides more than one highlight. And with such chances in the script, the cast proves thrilling.

Taking a third character first, Annice Boparai’s Nisha is a fine target for humour. As she campaigns to improve the area (she has badges), to label her as ‘woke’ is easy enough. But both Boparai and Joseph add skilfully to the role, showing us a character who is lost, vulnerable and genuinely well-meaning. It’s a part full of surprises that reflects the play’s combination of troubles and jokes.

There’s no question that, as Nadine and Jade, Gabrielle Brooks and Sapphire Joy have the appropriate star quality for these great parts. And these are fantastic performances. But note how cleverly Joseph flips the focus between the two. Is a link to ghosts our focus or a burgeoning political consciousness? Of course, with a play this good it is both.

Originally seen at the Theatre 503, the fear that the show might feel lost on a West End stage must have crossed minds. But that doesn’t happen for a moment. Aided by Zuyane Russell as a DJ, the palpable energy in this production is fantastic. Bearing in mind we only see four performers, dance and personality fill the theatre admirably. J’ouvert is a play to celebrate.