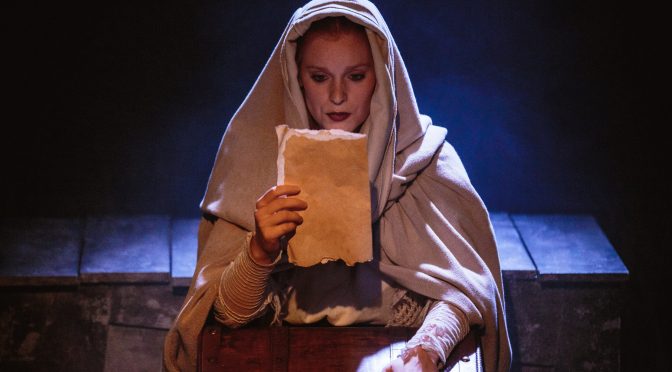 Bringing Daphne du Maurier’s novel to the stage is a good idea. A popular classic with a great story, it’s perfect for the winter. This adaptation by Lisa Evans is credible, dutifully following the adventures of the young Mary Yellan, who comes to live amongst criminals in Cornwall. But while imagination is not in short supply, director Anastasia Revi fails to bring her vision to life. Unfortunately, the gap between her ambition and what’s achieved is occasionally embarrassing.

Both novel and adaptation are strong on showing and questioning the status of women during the period. Kimberley Jarvis, who takes the lead role as our heroine, works well with this, showing both frustration and spirit. It’s a shame that Mary’s aunt, the other major female character, has nothing in common with her, giving Helen Bang, who takes the role, so little to work with. And Mary’s romance with a local horse thief strikes an unconvincing note: Samuel Lawrence looks the part but it’s hard to belief Mary would fall for his easy charm. But worse by far are the villains at Jamaica Inn, with the murderous landlord (Toby Wynn-Davies) deploying a pirate accent, and the mastermind of their plots – whose identity is supposed to shock us – acting like madman right from the get go. Such wooden characterisation destroys any tension to the point of making the story seem silly.

Too many directorial flourishes are poorly executed. The idea for Mary to have an accompanying voice-over isn’t a bad one – the internal dialogue in a novel is often missed on stage – but the delivery is weak. Revi’s direction of movement, with the exception of a fight scene that Jarvis excels in, is timid and inconsistent. Jonathan Bratoëff’s compositions make a competent soundtrack… until dire songs are introduced. Issue even has to be taken over their (mercifully) short length. It’s a guess that Jamaica Inn: The Musical wasn’t Revi’s intention, so why dissipate tension and puzzle the audience with random songs? By the time the show limps to its conclusion, and one poor cast member comes on dressed vaguely as a bloodhound, it’s no surprise that Jamaica Inn lacks guests.