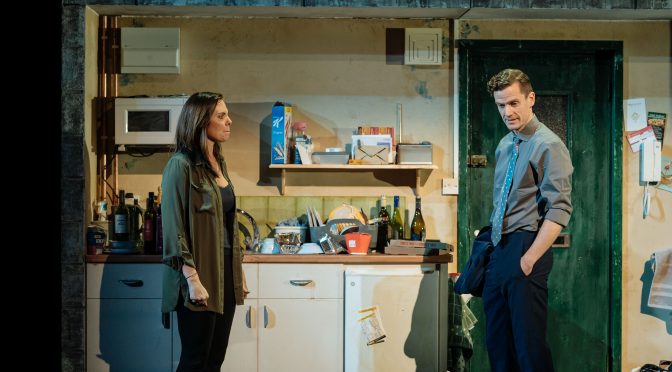 Before embarking on a national tour, Rachel Wagstaff and Duncan Abel’s adaptation of Paula Hawkins’ best-selling thriller is having a month in the West End. With considerable help from its star Samantha Womack, playing the alcoholic Rachel trying to remember what happened at the scene of a crime, it is a commendable effort to bring suspense to the stage. If you’re a fan of the novel, you might have some reservations, but the show’s journey is speedy and stylish, resulting in happy travellers.

As with a delayed departure announcement my heart sank at first. One of the more interesting things about the book is its unreliable narrator, deftly handled by Hawkins, and that’s sacrificed here for the sake of brevity. Rachel is, straight away, in a terrible state, puking up into a takeaway pizza box. Womack is a good stage drunk – her performance throughout is spot on – but Rachel is a victim from the start. It’s no plot spoiler to reveal that, unlike with the novel, you quickly dismiss the idea that she could be the villain of the piece.

The Girl on the Train is a mystery about memory, with maternity as a big theme. The suggestion fought with is that infertility has driven Rachel mad, while the victim of a crime, a babysitter called Megan, has a back story about a baby worthy of Barbara Vine. The themes are a juggling act Hawkins doesn’t quite pull off, so it’s no surprise that cramming it all into the play ends up unsubtle at times. Womack and Kirsty Oswald, who plays Megan, do well in emotional scenes, but director Anthony Banks doesn’t give them quite enough space.

You wouldn’t call the show very theatrical. Wanting to be faithful to the original source, and the film, takes precedence. Megan has some nice flashback scenes, but Oswald is oddly wooden in them. And Rachel’s tenuous grip on reality could surely have been made more of; might some of her fears be more literally shown? And maybe her ex-husband (while Adam Jackson Smith’s performance in the role is good) should be written with more ambiguity from the start?

For all these customer complaints, you wouldn’t want a refund. What the adaptation lacks in finesse it makes up for with action. The plot is précised expertly and the pace is fantastic. Banks does a keen job throughout. Jack Knowles’ work with the lighting is strong and the sound and music design from Ben and Max Ringham is up to their usual high standards. The audience is gripped and entertained at every moment, making this one train service with an eye on the clock that is a model of efficiency.