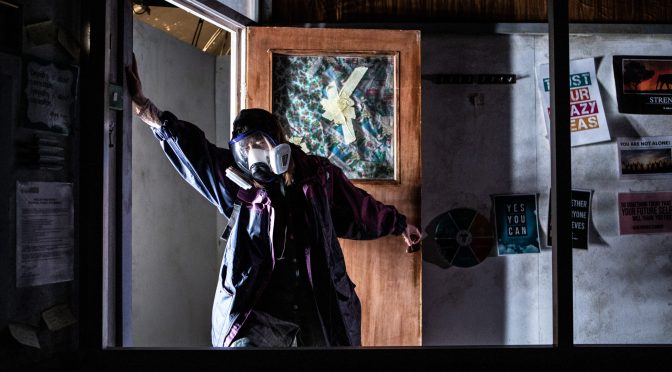 Super smart and far from monochrome, this transfer from Plymouth of Sam Steiner’s play proves to be the first must-see London show of 2020. It’s funny and moving, while quietly bold touches guide a sense of purpose delivered with impressive confidence.

Set in a helpline call centre in catastrophic times, you don’t need to have worked as a Samaritan to suspect the staff on stage are dubiously qualified. But, while this odd bunch might be amusingly ill-suited to deliver the care they offer, the hugely talented Steiner is an excellent listener. His ear for dialogue results in fantastic conversations, many one-sided, that are both comedic and emotional – a combination that makes the piece both delightful and intriguing.

The recognisable characters, with well-developed personalities and problems, play a big part in the piece’s success. The performances do the writing justice. The group is run by Frances, as irrepressibly perky as she is heavily pregnant, beautifully depicted by Jenni Maitland. Chatty Angie first appears to be a comedy foil, but Lydia Larson ensures considerable emotional impact from her. A well-written teenage role that Andrew Finnigan is perfect for, and a depressed older man that Andy Rush makes appealing, complete a quartet who are eminently easy to watch. From traumatic calls to simple pleasures from a story-telling caller named Merlin, moments of tension and relaxation are magically sculpted with fantastic talent.

We could be in a superior sitcom were it not for the dark surround Steiner crafts. Our heroes face big problems – that they always carry gas masks tells you that much! This is not just a charity on its last legs, but a society facing its demise. Yet, in a daring move, we never know the specifics of the apocalypse being faced. Of course, it’s hard not to presume an environmental disaster, but that’s never stated. Maybe it’s an interesting, naturalistic, observation? But sparing details can frustrate viewers – it takes guts. The focus is everyday lives: the way Steiner understates this dystopia keeps the audience on its toes.

You Stupid Darkness! goes well beyond your average dark comedy to become a play about hope. Director James Grieve does an excellent job of giving the script room to develop. Time is needed for hope to show itself – now we see why insisting that the odds faced remain unknown is important. The final scene of keeping calm and carrying on is profoundly moving by embodying those very qualities; the play gets quieter and more controlled as conditions worsen. Motivating the skill this takes, and surely the key to what makes the play so winning, reveals the humble realisation from a playwright who has written a five-star banger of a play – that listening to stories might be just as important as telling them. 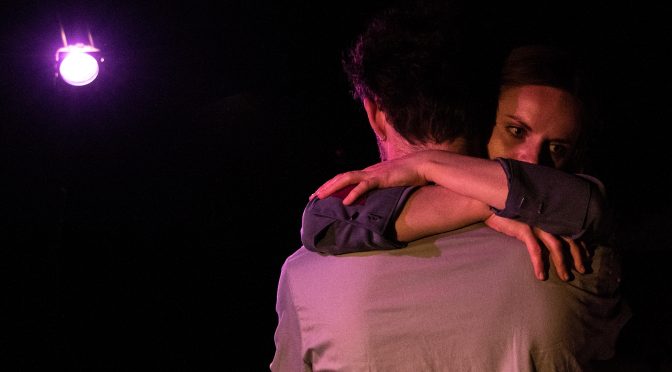 If the idea of seeing a dystopian drama, where the Government limits the number of words we use per day, gets the short answer from you, then you’ve made a good call on this occasion. But dismissing Sam Steiner’s drama as silly, or contrarian to the point of being crass, is too easy. The play is ambitious and adventurous, as its awards and success on the fringe indicate. And this production from First Floor Presents demands that we take it seriously, earning respect as a result. Unfortunately, the play’s targets – while one of the few clear things about this confusing piece – are missed by a long way.

Let’s leave aside any practicalities about the “hush law” imposed on the populace. Steiner isn’t interested in how or why and that’s his prerogative, even if it frustrates an audience. But the lack of detail makes it hard to examine one major theme of the play – that of protest. Surely the facts of what’s happened and what people do next are needed? We get a march or two and that’s all. Simultaneously, we are presented with the history of a relationship, which we see grow and put under pressure through a lack of communication. The problem is that the couple in question have troubles without a cap on words. It’s too hard to see them together from the get go. And here there’s too much happening – an affair, a slim back story, their sex and work lives, and a pet cemetery, for some reason – all raced through breathlessly. It’s tough to warm to them and, although the scenario is nightmarish enough, it is difficult to care.

It’s all something of a pity, as the two performers here do a good job. Charlie Suff makes for an amenable presence who ably delivers the humour of the piece. Jemima Murphy has a harder job as his neurotic girlfriend, but brings a compelling intensity to the role. The couple as written are pretty tiresome and don’t seem too bright, but it’s clear Murphy and Suff have worked phenomenally hard and their focus is impressive. Well done to both of them.

Director Hamish Clayton has made a similarly close study of the play. He brings variety to the pace of the scenes and exacts a sense of paranoid tension. But, like Steiner, he seems enamoured of the play’s oddities – “tricks” devised to use words wisely (and no, learning sign language isn’t one of them) that are left unexplained for too long, or interminably going back and forth in time. The tiny scenes and repetition, presumably designed to create tension, make this short play seem very long. That the characters reduce their speech and contract their sentences with such pain, and at such cost to comprehension, is clever but becomes excruciatingly laboured. Go see? Um, no.