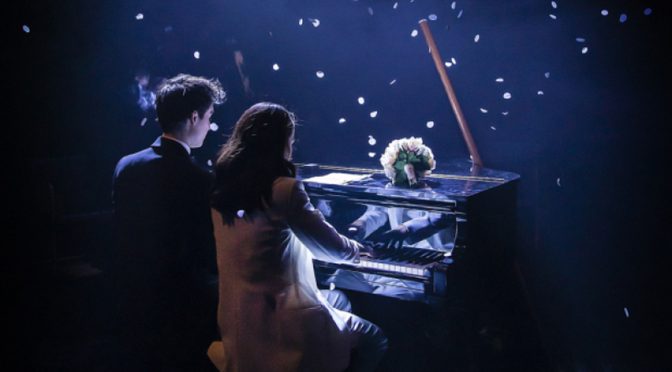 After having its run cut short by the lockdown, this return to the stage – for this five-star show – is especially welcome. This is a superb production of a fantastic musical.

Director Jonathan O’Boyle and his talented performers Molly Lynch and Oli Higginson, as the couple, Cathy and Jamie whose romance we follow, all get the most from Jason Robert Brown’s superb writing.

The story’s structure is original: Cathy’s tale plays backwards (we start by seeing the marriage end) and alternates with Jamie, who begins by falling in love. Showing us such highs and lows, flipping back and forth from song to song, is explicated and elaborated magnificently by O’Boyle.

The interaction between Lynch and Higginson – which is mostly ignoring one another – as they sing about different times in their lives, creates a layered, often ghostly, effect. A moment when Jamie reaches for Cathy’s hand, which she is oblivious to, results in shivers. Even smarter, both performers take turns on a piano, starting or ending each other’s numbers to startling effect. A revolving stage, part of Lee Newby’s set, adds further sophistication.

Sam Spencer-Lane’s choreography places extra demands on both cast members which, along with sounding great, they live up to. Again, some of the imagery created is almost spectral, as if each can see the other in their imagination but fail to really communicate.

Lynch brings a credible fragility to her sympathetic character that proves moving. We are on her side from the start. It was a worry whether she would manage lighter numbers but, thankfully, these have a satisfactory comedy to them. Lynch works wonders with a ukulele and that revolving stage.

Each time I see The Last Five Years I like Jamie a little less. The character seems more arrogant and selfish as I age! And Jamie objectifies Cathy something rotten. Countering this, Higginson’s performance is often charming and energetic, as well as always heartfelt. There’s an edge that makes me suspect Higginson doesn’t like Jamie much either… I hope so.

George Dyer’s musical direction is also impressive (the percussion sometimes a little heavy). And I wonder if the show was originally conceived for a proscenium stage, understandably altered for extra socially distanced capacity? I’d certainly recommend you don’t sit to the sides. So, the production isn’t perfect… but it’s pretty close, and one of the best shows in years.