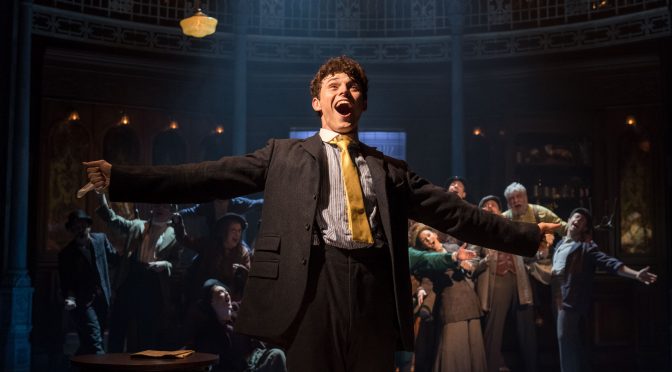 The Chichester Festival Theatre’s new version of David Heneker’s musical arrives in the West End trailing rave reviews. And rightly so. Surely some critics were aggrieved that producer Cameron Mackintosh, credited as co-creator, had already bagged the perfect description to promote his work – this really is a “flash, bang, wallop” of a show.

The simple love story of an apprentice haberdasher who comes into money and has to choose between his childhood sweetheart and a once unattainable upper-class lady gives us a pleasingly Pygmalion spin and a hero, one Arthur Kipps, every bit as endearing as Eliza Doolittle.

Arthur may be called Art by his friends, but it is his artlessness that makes him so appealing, genuine and infectiously joyous. Taking the lead has catapulted Charlie Stemp into the big time with a star-is-born moment that theatre goers will find electrifying. Stemp can sing as superbly as he can dance – and he can act, too. In short, he’s the real deal.

Ironically the big achievement of the show, with new music and lyrics by George Stiles and Anthony Drewe, and a book by Julian Fellowes, is to downplay Kipps’ part. Originally an uneven vehicle for Tommy Steele, the show has been recalibrated to allow the rest of the cast to rise to Stemp’s achievements. Both of Arthur’s love interests are superb. Devon-Elise Johnson plays the love-token-swapping parlour maid with credible vigour. The posh idol, Helen Walsingham, is Emma Williams, and, in a piece where toffs do badly, she’s still appealing, making Arthur’s decision a real dilemma.

Half A Sixpence praises working-class culture in a manner that is out of fashion and makes for a fresh change. Arthur’s colleagues in the shop are wonderfully delineated (praise for Sam O’Rourke, Alex Hope and Callum Train). As for Bethany Huckle’s Flo, Arthur may not fall for her, but I did, with an end-of-the-pier number about sexual frustration that makes the role stand out. This new song, ‘A Little Touch of Happiness’, perfectly embodies a postcard humour that makes many numbers here laugh-out-loud funny, with a sentimentality that magically weaves naiveté and nostalgia. All are combined to perfection by director Rachel Kavanaugh. And this is before the storming second-act number, ‘Pick Out a Simple Tune’, with one cast member literally swinging from a chandelier. What more could you ask for?

It isn’t just the deserving praise already received that gives the show its unbounded confidence. In Kavanaugh’s capable hands, taking a lead from the cleverly constructed new material, Half A Sixpence is akin to a theatrical comfort blanket. We know when to applaud – freeze frame on the action and get ready to clap – and when to give a standing ovation. With the keen-as-mustard cast delighting in its triumph everyone goes home happy.