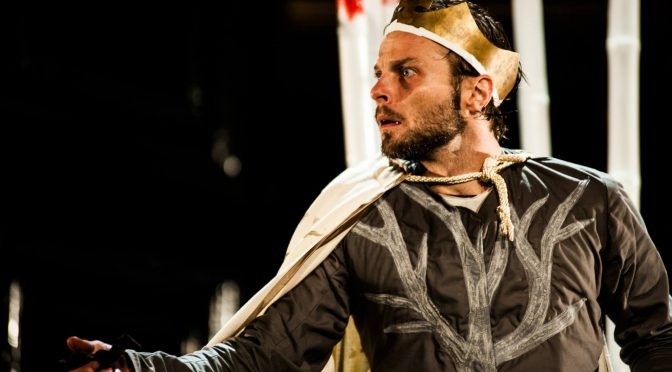 With many theatregoers anticipating Martin Freeman’s forthcoming turn as Richard III, Iris Theatre have stolen a lead by presenting their own version, which opened last night. Based at St Paul’s Church in Covent Garden, the promenade production uses both the grounds and the building’s acoustics superbly. As an audience member you will bustle around, and even be asked to march, as part of an engaging and intimate show that’s carefully directed by Daniel Winder.

The actors have to deal with a lot of background noise at St Paul’s, and it leads to a rather declamatory style. It becomes a little tiresome, but it’s churlish to complain since you can hear every word, and that’s the important thing. The scene-setting prelude from Henry IV Part III also adds clarity. If the play becomes overblown, with Richard’s villainous plotting increasingly elaborate, then Winder embraces this well: there’s plenty of blood, an eye for the supernatural and a gruesome final tableaux that’s simply spectacular.

The small cast of eight works incredibly hard. There are the inevitable moments of confusion when cast members reappear as different characters and some of the changes are unfortunate. Sam Donnelly and Laura Wickham do well to establish Edward VI and Elizabeth as a loving couple and Mark Hawkins gives a brave performance as the deposed Queen Margaret. Much stress is placed on the fruition of Margaret’s curses by Winder; it’s an insightful perspective which could stand to be explored further.

David Hywel Baynes takes the lead role. His is a traditionally ‘misshapen’ Richard, complete with an old-fashioned hump. What marks out his portrayal is the interactive element. Addressing the audience, helping them to move around and even sitting with them, his contact with the crowd is masterfully done and makes us complicit in his ‘secret mischiefs’. This Richard is a cheeky, cheerful conspirator – a clever way to show us the bad guy’s charisma. Even better is the way he develops the character when he becomes king; his increased menace and mania adds to the drama. Hywel Baynes is head and shoulders (or should that be hump?) above some members of the cast. His performance alone makes the production an easy one to recommend.

Written 1 July 2014 for The London Magazine