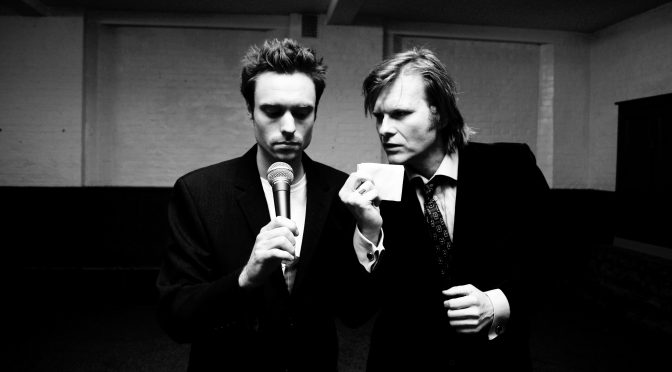 ”Fame, fame, fatal fame.” Morrissey’s desire for celebrity, which he sang about in 1985, is one now widely embraced. The Smiths singer imagined embellishing his autobiography in order to boost his creative credentials. Is this a step many of us would make in order to acquire fame? And if we did this, what would the toll be on our loved ones and ourselves?

Michael Ross’s new play, That Joke Isn’t Funny Anymore, poses this question of how we narrate our life stories with intelligence and wit. Mark Elias plays Leon Shepherd, a stand-up comedian driven to the edge of sanity while waiting for his big break. Elias conveys his desperation and then astonishment as a series of figures begin to appear from his wardrobe to perform their own stand-up routines.

These ghosts from his past are presented to him by Pete Picton, a delightfully Faustian figure who poses as an experienced comedian and clearly thinks little of Leon’s efforts, despite his own jokes coming from another age. He introduces Leon’s mother (Sacha Walker) and drama teacher (Isabel Carr), whose performances as radical feminist and visionary pedagogue are well-observed caricatures.

Both women seem to have left a scar but, as the plot thickens, we learn that Leon may have a darker secret. The next guest is his old partner Jimmy. Julian Farrance plays the role as a foil to Leon. He possesses the confidence Leon lacks and, while his comedy routine plays around with the truth, he has a sincerity that makes us question his old partner’s story. It’s a suspicion confirmed as Tony Rowden’s Inspector of Police arrives to cap off the wonderfully surreal proceedings – let’s just say a glove puppet is involved.

This is a well-constructed and thought provoking play. At only an hour long, it leaves you wanting more with a resolution that seems too short. There is great ambition here – it takes courage to write and perform consciously bad jokes that will unsettle an audience. Ross’s knowing remarks about the construction of comedy and performance show us we are in safe hands though. There is a sensitive, somewhat maudlin touch here that leaves a lasting impression.