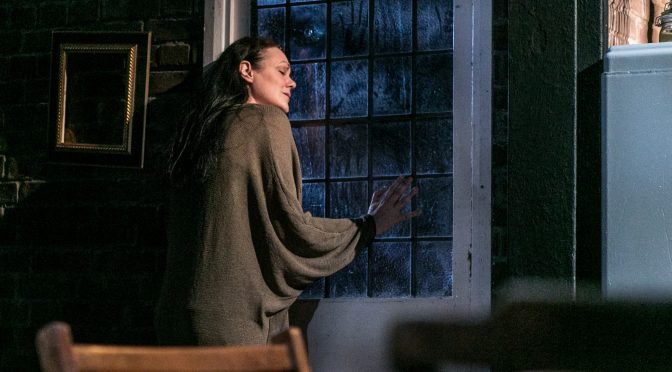 This new ‘chamber’ musical, a project from Eamonn O’Dwyer, is a brave and exciting examination of a damaged family. The music, performed by a quartet, is haunting and stimulating, the lyrics competent and clear, while the strong story of a mother and two daughters dealing with bereavement and a love affair, gives the show its considerable momentum.

The singing in the piece might be stronger, but the acting is superb. Gillian Kirkpatrick plays the matriarch Anna with an uncanny ability to change from a caring mother to an older alcoholic, as the play’s chronology moves around. A jerky Sondheim-style number, ‘Something For The Pain’, is superbly delivered, capturing the precarious bonhomie of the drunk. Anna’s daughters show two extreme reactions to grief: Grace Rowe’s Laura is painfully withdrawn, while Molly McGuire makes Lily a convincingly dangerous extravert. An academic who finds himself lodging with this traumatised trio (and starts a romance with one of them) isn’t as well studied: not only is his treatment of the manuscripts he is working on shocking, he’s too easily dominated. The production is lucky to have Jamie Muscato in the role – he sounds great and stakes out a space for the character.

Minor misgivings pale given the play’s strong plot. The book, worked on by Rob Gilbert with O’Dwyer, is neat and novel – a mix of gripping mystery and a spooky supernatural angle well grafted onto an intricate family drama. It reminded me a little of a Barbara Vine book, with an unsettling nostalgic feel that draws you in. There’s a level of detail that director Ryan McBryde handles well and gives the show stand out from a lot of other musicals. Be intrigued and go see.