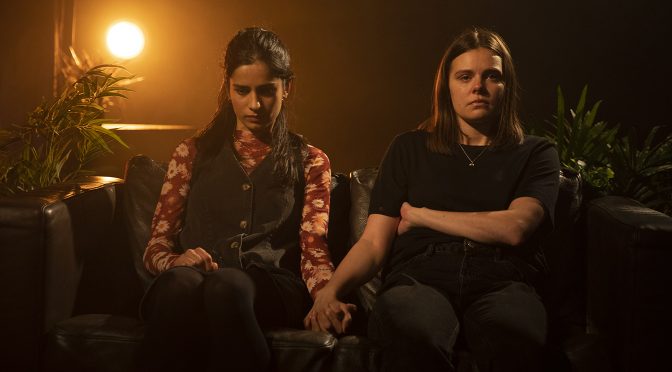 Confidently written and well performed, Flora Wilson Brown’s new play is an intelligent and sensitive examination of sexual abuse. This ambitious work is worth checking out, despite not being an easy play for two reasons.

First, the subject matter is tough. We hear the story of a young woman who was groomed by a pop star, only later revealing the truth now that he is famous. Meanwhile, the musician is travelling to a wedding with an old friend, so the audience sees him in a very different light. It’s a neat way of challenging preconceptions, further aided by surprising humour on Wilson Brown’s part.

With both extended scenes delivered at the same time, I Know I Know I Know is dense viewing that makes demands on the audience. But the results are worth it. The dialogue overlaps in a marvellous fashion. Aided by Harry Tennison’s direction, there are explosive connections from the simplest words. As the moods of the three characters in the piece change, the script has a tense, flowing energy.

I Know I Know I Know isn’t perfect. Victoria Maytom’s set is an unhappy affair that doesn’t help the audience work out what’s going on and seems like an obstacle course for the performers. Anna Short’s sound design is effective but lacks the subtlety of the script. The lighting, from Ryan Day, is more appropriate – drawing the audience in and out of the action with an ebb and flow that fits the piece.

Wilson Brown’s well-written roles produce great performances. Well done to Martha Watson Allpress and Ethan Moorhouse, who play friends from university whose lives have become very different. They both have their problems. Watson Allpress brings a febrile energy to her role, while Moorhouse reveals his rock star character’s demons gradually. The key is that both are likeable – she has a wit to warm to, and he brings charm appropriate to the character’s success.

It is the victim, Alice, who is the focus of the show, and this proves a triumph for Wilson Brown and performer Hannah Khalique-Brown. There’s a lot of detail about Alice’s trauma; how the affair started and developed as well as how it has affected her. But this is written and delivered with a balanced approach that avoids sensationalism. Alice is a character whose honesty we never doubt (it must have been tempting to introduce scepticism for the sake of drama?). That Alice is still in love with the man who had been so terrible to her is haunting.

Wilson Brown has to skim around some of the interesting points that make her characters well rounded. And the play’s resolution, while emotional, feels truncated. But the piece is weighty and easily intense enough to impress. The age gap between the characters isn’t as great as they themselves seem to think, and that we aren’t dealing with some seedy Saville type is an important point. The play succeeds in bringing fresh insight to an important topic.