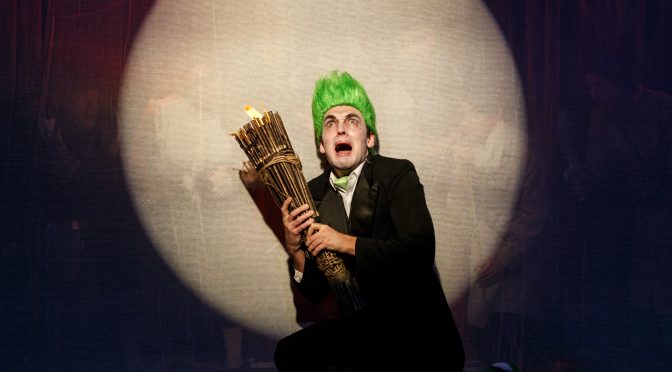 Born and bred in Belfast and a hit in Edinburgh, Paul Boyd’s Molly Wobbly is a raucous, irreverent musical that’s rude and laugh-out-loud funny. Clearly influenced by The Rocky Horror Show, music hall and Carry On films, yet camper than any of these, Molly Wobbly proudly stands out as good, clean, smutty fun.

The unhappy marriages of the residents of Mammary Street are changed after a radioactive Romanian plastic surgeon moves into their town of Little Happening. Mr Ithanku, performed with style by Russell Morton, hears the dreams of three couples – but is obsessed with his own agenda of the ultimate makeover. There are hot flushes, magic potions and murderous intentions – beauty comes at a price.

The three women bravely abandoning their blouses are splendid, with Jane Milligan having the most to, ahem, offer. Among the husbands, Conleth Kane stands out as he’s barely able to move (or should that be mince?) without getting a laugh. And there’s a great performance from Alan Richardson, who milks his unrelentingly filthy number about one-night stands, along with a small walk-on as the best dancing nun I’ve ever seen. And I’ve seen plenty.

Some of the direction, also from Boyd, might be speedier. I could have done without the malapropisms – they seem a little too easy – although they went down very well. More music, please: this is a strong collection of songs with fine, clear lyrics. What Molly Wobbly really needs, and deserves, is a bigger venue. Of course it’s great to see a show in intimate surroundings, but the impressive projections really suffer, and I’d love to hear the score performed live. Molly Wobbly is just as strong as several recent big West End offerings and has a lot more guts – it should be massive.