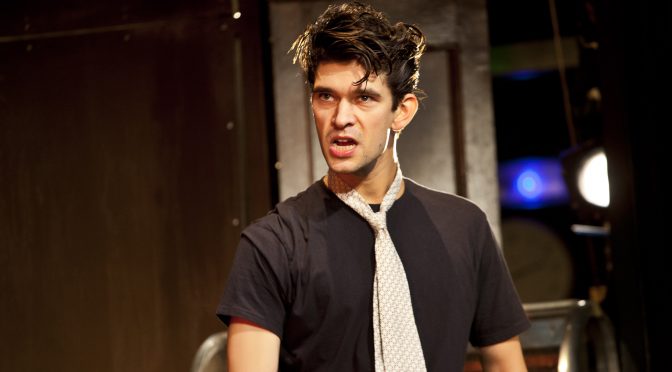 Jez Butterworth’s play, Mojo, was a huge hit in 1995 for the Royal Court and its revival at the Harold Pinter Theatre is a welcome event. The première work from a playwright destined for huge success, it’s set in gangland Soho in the late 1950s, with the owner of a nightclub and would-be music promoter murdered. Menace is continually offset by ineffectual gangsters, and then reinjected by mental instability and manic tension. It’s a playwright’s script, full of inspiration from modern masters, with the language poetically reflecting the new craze for rock and roll. A fine plot, superb characters and serious comedy secure wide appeal. There’s high drama, breathtaking suspense and laughs out loud from a sense of humour that is darkly, madly, deeply funny.

For this revival, the focus is sure to be on a stellar cast. And they don’t disappoint. Brendan Coyle takes time off Downtown Abbey to play the man ready to step into his assassinated boss’s shoes, claiming possession of the club while trying, and failing, to control his staff. He has to deal with Sweets and Potts, a pill-popping double act played by Rupert Grint, of Harry Potter fame, who makes a fine West End debut and can’t be blamed for being upstaged by the excellent Daniel Mays, who has the audience in the palm of his hand. It’s just as hard to ignore rising star Colin Morgan who gives a superb performance as another employee. In common with his colleagues, Morgan shows the thin skin underneath the machismo and how these men see the club, with all its power politics, as a home and family as well as career.

But it is Ben Whishaw who is the real star of the night. In the role of Baby, abused son to the murdered owner, and a damaged character who bursts into song and runs around with a sword, he manages to make both activities just as frightening. It’s his finest performance since Hamlet back in 2004 and makes you ponder about connections between the two plays. Avoiding plot spoilers, it’s fair to say something is rotten with the state of the nightclub and, if this insane heir-apparent isn’t indecisive, the court politics and innocent victims ring bells. It’s a resonance that indicates how rich Butterworth’s play is – concerning men, their place in the world and with one another, that run deep. This Mojo is box-office magic that lives up to expectations and really is as good as it sounds.

Written 16 November 2013 for The London Magazine