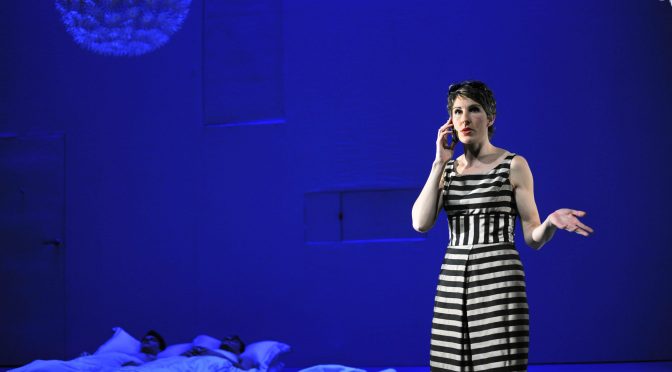 It is always satisfying to have a play’s title explained to you.  The Little Dog Laughed is set within the world of Hollywood so quoting a nursery rhyme to point out the nonsense that goes on in tinsel town makes a lot of sense.

The plot is simple.  A successful actor’s agent has to deal with her client’s ‘recurring case of homosexuality’ which threatens to come to light when he becomes involved with a prostitute, who in turn discovers he is about to be a father.

To complicate matters, the actor is about to start a new project in which he plays a gay character.  His agent insists this will only work, and acclaim only be awarded, if he is known to the world as heterosexual.

The potential for farce is plentiful and the play has lots of laughs.  Rupert Friend plays Mitchell the actor, Harry Lloyd the rent boy Alex, and Gemma Atherton his girlfriend Ellen.  All three manage to convey endearing characters we can warm to despite their faults.

It is a shame that with an English cast, the east coast/west coast division that the play contains isn’t fully conveyed.  Yet this hardly matters when the laughs are arriving so regularly.  Friend’s charming naivety compares wonderfully with Lloyds well-pitched sarcasm.  Atherton’s character has satisfying layers.

It is Michell’s agent Diane who really allows the piece to take off though.  Tamsin Greig plays the role of Diane masterfully – this is a great character and Greig knows it. Rapacious, ambitious or just a realist?  Diane has jokes about being all three, but it is not just a case of the devil getting all the good lines.  The scripts clever observations about theatre and how it differs from film are embodied in some delightful improvisation from Greig.  Her raised eyebrows deserve an award.

Just in case all this doesn’t sound fun enough and perhaps celebrity doesn’t attract you, Douglas Carter Beane’s award winning play concerns itself with much more – primarily that characteristic American theme – the pursuit of happiness.

For some characters this lies in a search for innocence.  In a touching speech about childhood recollections, Ellen’s captivation with the image of the good life will come to explain her strange decision-making.  Alex values freedom more and, while pragmatic, ends up as the one who makes the fewest compromises.

It is the omniscient Diane who presents to us what the pursuit of happiness is often substituted with – stories and the telling of them.  As author to several other people’s fate she is a delightfully sinister figure, all the more so since she insists on making sure everyone is happy. And the audience surely is.  The fast paced direction from Jamie Lloyd perfectly compliments the writing.  A minimalist design from Soutra Gilmour is both stylish and appropriate to the theatricality of the piece.  After all, you don’t need many props for a fantasy.  Carter Beane’s play has a British debut it deserves.  The quality of the writing makes it a play not to be missed.

Written 21 January 2010 for The London Magazine